Loren Miller commented on Loren Miller's group Quote Of The Day
"God is just a sick, sexually frustrated bully who likes to jerk off to us while we cry. -- Steve…"
4 hours ago

"Richard, remember this from the recent past?  "Don't drink the cool-aid" "
21 hours ago

Loren Miller left a comment for Andi Quinn
"Greets, Andi, and welcome!  I hope you enjoy your time here."
23 hours ago

Mrs.B left a comment for Andi Quinn
"Good to see you here."
yesterday

Mrs.B left a comment for Wallis Lucy
"Good to see you here."
yesterday

WHAT DID HITCH MEAN FOR YOU? 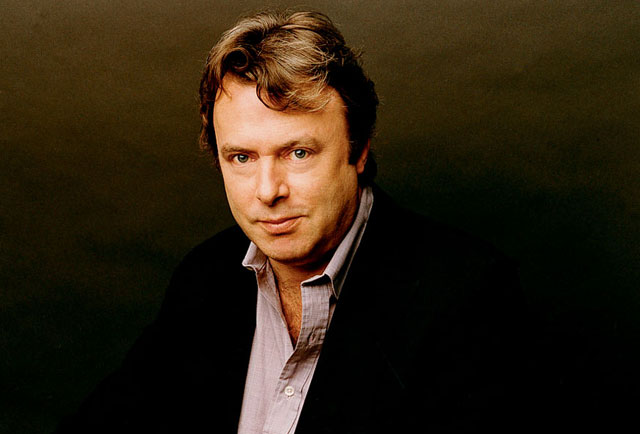 What Christopher Hitchens meant to me cannot really be described in words. He was such an amazing human being and I cannot believe he is really gone. Over the past few months he had even exchanged emails me with me on a couple of occasions. He was truly a hero.

Christopher Hitchens was a man of courage and honor. Hitch always spoke his mind and took the fight to religious bigotry and was unapologetic about it. In addition, he was not a cultural relativist or an Islamic apologist like is the case with many atheists. He called Islamic ideology for what it truly was: totalitarianism and oppression. In addition, he was a great friend for freedom and democracy and although he was a leftist all his life, he stood and supported the Iraqi people for their quest for freedom - particularly the great Kurdish people. And as an Iranian, he was a great friend of the Iranian people and it is a shame that he was not able to see a free Iran in his lifetime. Most importantly: he was genuine and one of the most insightful and intelligent human beings I have ever heard whom possessed great insight and a realistic foresight of world problems.

I will write more on him later but he was truly a hero of mine and I don't have any other heroes. He was someone that inspired me in ways that cannot be expressed. For the rest of my life, I will try to live with his ideals and inspiration as much as I can. To be honest, right now has become one of the gloomiest and darkest days, and my heart feels empty.

I was just listening to a lot of his debates, he spoke so impressively. Though I did not know him, I will remember him.

This is the first time I hear of his death, where did you read the news? A very vibrant person, a superb writer, someone who was not afraid to speak his mind or to change his mind if he thought it was time to do that. I did not always agree with his positions but he was very important for the atheist movement and he made a lot of people think. He had the courage to be self-critical, especially when he said he had not been a good father, and self-criticism and honesty with oneself is such a rare quality.

He was a fortunate person, he lived the way he wanted, he was a bon-vivant and had no regrets. A good life, a life lived to the fullest. I admire how he did not become totally self-centered around his cancer, he still wrote about politics, he was still interested in the world. That really showed a strength of character not many have.

We have lost an inspiring freethinker! :'(

I loved this debate so much!

A very good article in the NYT about Hitchens (some very good comments from readers, too):

Polemicist Who Slashed All, Freely, With Wit

Christopher Hitchens, a slashing polemicist in the tradition of Thomas Paine and George Orwell who trained his sights on targets as various as Henry Kissinger, the British monarchy and Mother Teresa, wrote a best-seller attacking religious belief, and dismayed his former comrades on the left by enthusiastically supporting the American-led war in Iraq, died Thursday at the M. D. Anderson Cancer Center in Houston. He was 62. 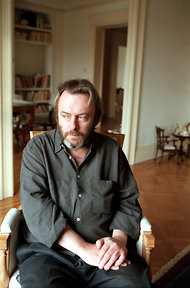 Christopher Hitchens in Washington, D.C., in 1999.

Christopher Hitchens a few hours after being released from the M. D. Anderson Cancer Center in Houston in October.

The cause was pneumonia, a complication of esophageal cancer, said the magazine Vanity Fair, whichannounced the death. In recent days Mr. Hitchens had stopped treatment and entered hospice care at the Houston hospital. He learned he had cancer while on a publicity tour in 2010 for his memoir,“Hitch-22,” and began writing and, on television, speaking about his illness frequently.

“In whatever kind of a ‘race’ life may be, I have very abruptly become a finalist,” Mr. Hitchens wrote in Vanity Fair, for which he was a contributing editor.

He took pains to emphasize that he had not revised his position on atheism, articulated in his best-selling 2007 book, “God Is Not Great: How Religion Poisons Everything,” although he did express amused appreciation at the hope, among some concerned Christians, that he might undergo a late-life conversion.

He also professed to have no regrets for a lifetime of heavy smoking and drinking. “Writing is what’s important to me, and anything that helps me do that — or enhances and prolongs and deepens and sometimes intensifies argument and conversation — is worth it to me,” he told Charlie Rose in a television interview in 2010, adding that it was “impossible for me to imagine having my life without going to those parties, without having those late nights, without that second bottle.”

BBC:NEW!
Christopher Hitchens dies at 62 after suffering cancer  —  Vanity Fair's editor said those who read him felt they knew him  —  British-born author, literary critic and journalist Christopher Hitchens has died at the age of 62.  —  He died from pneumonia, a complication of the oesophageal cancer he had, at a Texas hospital.
Discussion: Simply Left BehindThe …


Christopher Hitchens—the incomparable critic, masterful rhetorician, fiery wit, and fearless bon vivant—died today at the age of 62. Hitchens was diagnosed with esophageal cancer in the spring of 2010, just after the publication of his memoir, Hitch-22, and began chemotherapy soon after. His matchless prose has appeared in Vanity Fair since 1992, when he was named contributing editor.

“Cancer victimhood contains a permanent temptation to be self-centered and even solipsistic,” Hitchens wrote nearly a year ago in Vanity Fair, but his own final labors were anything but: in the last 12 months, he produced for this magazine a piece on U.S.-Pakistani relations in the wake of Osama bin Laden’s death, a portrait of Joan Didion, an essay on the Private Eye retrospective at the Victoria and Albert Museum, a prediction about the future of democracy in Egypt, a meditation on the legacy of progressivism in Wisconsin, and a series of frank, graceful, and exquisitely written essays in which he chronicled the physical and spiritual effects of his disease. At the end, Hitchens was more engaged, relentless, hilarious, observant, and intelligent than just about everyone else—just as he had been for the last four decades.

“My chief consolation in this year of living dyingly has been the presence of friends,” he wrote in the June 2011 issue. He died in their presence, too, at the MD Anderson Cancer Center in Houston, Texas. May his 62 years of living, well, so livingly console the many of us who will miss him dearly. 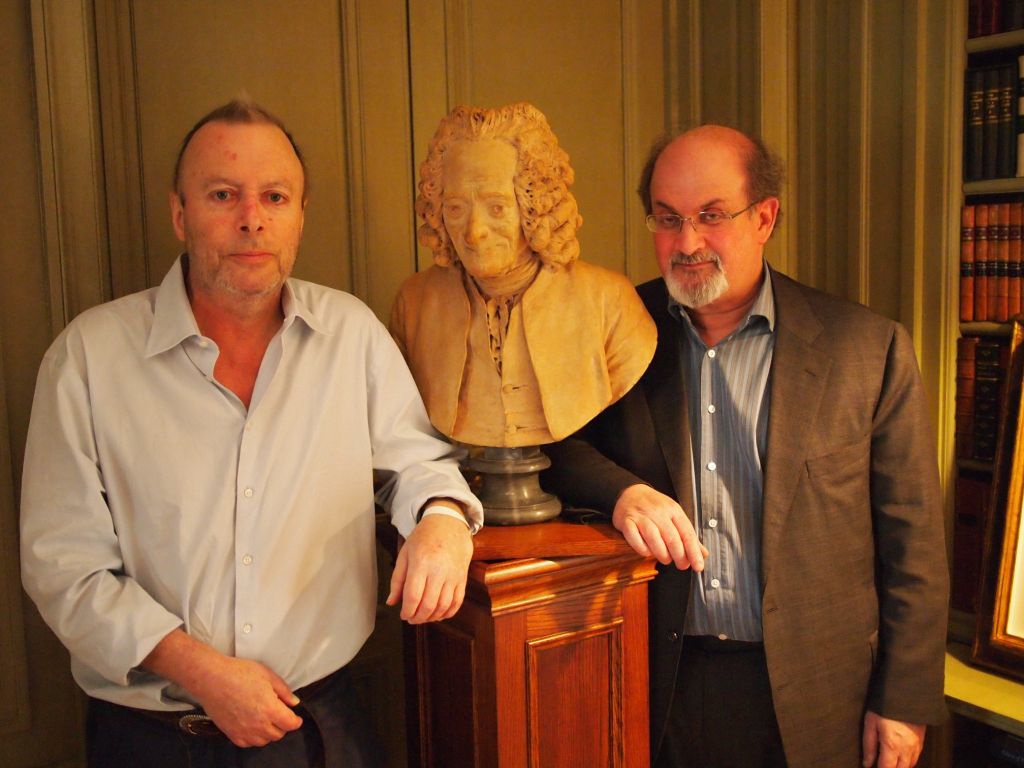 Since probably not all of you read or follow The Nation, here's a tribute from one of The Nation writers, D.D Guttenplan, who has known Hitchens since 1979. I like it that the Nation publishes a tribute since he left The nation under not such great terms over his agreement with the Iraq war.

The last time I saw Christopher was in the summer of 2009, when he materialized at the edge of the audience after I’d done a reading at Politics and Prose in Washington. There had been a kind of froideur between us over various matters, some personal and some political, and I was deeply touched that he’d come. After exchanging kisses he asked if I was free for dinner and I explained that I was going out with my cousin and her daughter, who’d just finished her first year as a midshipman at Annapolis.  After we parted my young cousin said, “It’s so cool that he came.” And it was.

Agreeing—or disagreeing—with all of Christopher’s positions over the years was impossible.  But he was always very easy to love. The last email he sent me to was to correct my mistaken attribution of a quotation.  And the last email I sent to him was to ask him about a phrase he’d written in Vanity Fair: “Heroism breaks its heart, and idealism its back, on the intransigence of the credulous and the mediocre, manipulated by the cynical and the corrupt.” If we are all lucky, I wrote, “and you recover, I'd love to ask you to unpack that epigram someday.  But frankly I'd settle for your being well enough to tell me to go fuck myself.”

I my son and I both looked to Hitchens as a role model for how a person should face their mortality. He was a true hero to me.

The way he faced his diagnosis and the way he wrote about it are perhaps the things I admire him most for.