Loren Miller commented on Loren Miller's group Quote Of The Day
"Do not all theists insist that there can be no morality, no justice, honesty or fidelity without…"
45 minutes ago

Ian Mason commented on Sydni Moser's group Coffee Break
"An interesting discussion. The point seems to be where and when to draw a line. There are European…"
6 hours ago

A few days ago we were discussing the fact that there are many more male atheists than female atheists, and according to the Atheist Census (please be counted, if you haven't done it yet), the ration of approximately 3:1 male to female atheists holds all over the world.  We periodically discuss why this is the case. There are many contributing factors, no doubt about it. But I came across an article today that made me think that perhaps internet access is one of the contributing factor in this disparity. I have heard many people comment that they have become atheists thanks to the internet, either because they learned about books such as The God Delusion or God is Not Great through various social networking sites and blogs, or because they started searching around, googling stuff and they realized their beliefs no longer made any sense to them. In other words, they found information, as well as logic and reason, through the internet. 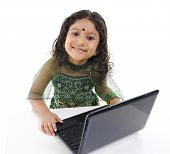 Thus, if females worldwide have less access to the internet compared to males, that may contribute to females staying religious rather than "deconverting", in higher numbers than men. The article I read is based on a recent report, called Women and the Web, produced by Dalberg (a strategic advisory firm to promote development globally) in partnership with Intel Corporation. The gender gap is roughly 25% overall in the developing world, meaning that for every 4 men who have access to the Internet’s opportunities and benefits, only 3 women have that same access. The gender gap is not uniform and it varies by regions, for example, in Latin America the gap is only 10%, while in India, the Middle East and North Africa is 35%, and in Sub-Saharan Africa it is 50%. Part of the gap is due to stupid sexism, like women can't understand technology and would break the house computer if they play with it, to virulent patriarchal notions of viewing women as property to be shielded from contact with the world, such as in many Islamic countries (religion always has a bad influence on gender disparity issues, no question about it).

I believe this is true for westernized countries and I'm actually surprised that 3 women use the net as opposed to 4 men;  maybe the time they spend (women versus men) has not really been calculated.  I also agree that in muslim countries the disparity is much bigger.  This is a very interesting topic.

Permalink Reply by Adriana on January 15, 2013 at 7:14am
Thanks for commenting, Marianne. I believe that in developed countries there is a bit if a gap too, in usage, maybe not access. I have to go dig a bit, but I think I've seen some data on how much time females and males spend on the Internet, in the US.

In the US, there is no gender gap in internet usage, though what women and men do while online is slightly different in terms of percentages. From Wikipedia:

It would be interesting to get a breakdown by age.

In my experience, young women are more enthusiastic (and dare I say, apt) than men when using Facebook for instance. On the street, I see more teenage girls texting & facebooking than I see boys doing it.

There is a breakdown by age in the Wikipedia article but the link is broken!

The underrepresentation of women in the expanding American secular movement is an uncomfortable issue for many secularists and atheists. Many deny that there is a “woman problem” in organizations dedicated to the promotion of secular values. As an author who speaks about secularism—specifically, America’s secular history—to many different kinds of audiences, I can assure you that there is a problem.

When I speak before non-college audiences—that is, audiences in which no one is required to be there to get credit for a college course—75 percent of the people in the seats are men. The good news is that this is a significant improvement over the situation that prevailed eight years ago, when my book Freethinkers: A History of American Secularism was published; at that time, my audiences were about 90 percent male. The bad news is that the gender gap in this movement remains as large as it is, although it’s less striking among people under thirty. The question is why.

The first and most obvious reason is that women, in the United States and every other country, are more religious and more devout in the practice of their religion than men. Public opinion polls show that this disparity affects every income, educational, and racial group—although it is much narrower among the highly educated than among the uneducated and the young than the old. African-American women, regardless of their level of education, are the most religious demographic in this country. This fact alone tells us that education is not the decisive factor, because although black women as a group are better educated than black men, black men are less religious. Space doesn’t permit a lengthy analysis of why women are more religious than men, so I’ll simply say that the greater religiosity of women means that both secular humanism and atheism are tougher sells to women.

That is a great article. I get The Humanist at home and i read it in full when it came out. I'm a big fan of Susan Jacoby. She is a big asset for the atheist/humanist community.

I loved this part, including her sarcastic humor, which I underlined:

I’ll also note that the very question of why women are more religious than men often elicits a prejudiced, sexist response. When I first began writing for the “On Faith” section of theWashington Post, one of the earliest questions asked for an explanation of women’s greater religiosity. An amazing number of men on my blog answered baldly, “Because women are stupider than men.”

I think most of us can agree, without parsing SAT and IQ scores, that this is not exactly a reasonable, evidence-based answer. It represents the so-called thinking of a group of modern-day social Darwinists who make up one component of the secular movement. These were the same angry white guys who would often call me “Susie” in their comments. Interestingly, the religious right-wingers on the blog simply referred to me as an “ugly old atheist.” (Apparently the former were under the impression that using a diminutive would make any woman burst into tears, while the latter group thought that calling you ugly or old was the worst possible insult.) I don’t want to make too much of this, in part because I place about as much value on anonymous opinions expressed on blogs as I do on professions of eternal love after drinking the night away in a bar.

This is also very good (bold emphasis is mine):

Every one of us old enough to remember knows that the leadership of the feminist movement of the 1970s was disproportionately secular. But it’s not talked about or written about much, because one of the main accusations leveled by the right against feminism is that its proponents are godless. Certainly not all feminist women are godless, but a godless woman is more likely than not to be a feminist. There are exceptions. Ayn Rand, the great heroine of the far right (which is willing to overlook her atheism because of her idolatry of the free market), was extremely misogynous in her views.

The restoration of secular women to the history of various social movements is, I think, essential to attracting more young women into our ranks. But that alone isn’t enough, because we need to admit that some political divisions within our movement may make secular organization seem particularly inhospitable to these young women.

Let’s just admit it: there is a real division between secular humanists and secular conservatives—something that would surprise the religious right, which considers all atheists as socialists. In the Center for Inquiry, the organization with which I’m most familiar, this often expresses itself as a division between “humanists” and people who call themselves “skeptics.” There is a lot of overlap between these two groups but, in my experience, the skeptics tend to be more conservative and more male-oriented. Incidentally, I’ve been invited only once to speak at an event put on by people calling themselves skeptics, but I’m constantly being invited to speak before humanist groups.