Loren Miller commented on Loren Miller's group Quote Of The Day
"One of the great tragedies of mankind is that morality has been hijacked by religion. -- Arthur C.…"
2 hours ago

Chris B commented on Sydni Moser's group Coffee Break
"Late again! I hope you had a nice birthday and a fine start of your new year, Joan!"
9 hours ago

Stephen Brodie left a comment for Joan Denoo
"Happy birthday my dear. Have a Good one Joan."
17 hours ago

Mrs.B commented on Sydni Moser's group Coffee Break
"Haven't seen you in a while, Joan. Happy Birthday."
21 hours ago

Loren Miller left a comment for Joan Denoo
"Best of the day to you, Joan! HAPPY BIRTHDAY!!!"
yesterday

Loren Miller commented on Loren Miller's group Quote Of The Day
"A mob is a place where people go to take a break from their conscience. -- Aaron Sorkin Y'all…"
yesterday

Chris B commented on Sydni Moser's group Coffee Break
"And liberating too!"
yesterday

Mrs.B commented on Sydni Moser's group Coffee Break
"I don't know what I am, other than bored to tears with political things."
yesterday

Stephen Brodie commented on Sydni Moser's group Coffee Break
"I'm a republican(Anti-Monarchist) an Atheist and a socialist, so I have been called all sorts…"
yesterday

Mrs.B commented on Sydni Moser's group Coffee Break
"Oh yeah, playing that will make such a difference!!!....gimmee a break. We get accused of not being…"
yesterday

Atheist Census is a project to count and collect demographic information on the world’s atheists.

2.     What are the objectives of Atheist Census?

Atheist Census aims to build a picture of the world’s atheists – where they are, their genders and ages, their education and religious (if any) background – and use that information to demonstrate the presence and importance of atheists in societies around the world.

Atheist Census is a project of Atheist Alliance International (AAI), a global alliance of atheist/freethought groups and individuals.  AAI’s website is www.atheistalliance.org.

5.     Why do I have to provide my email address to participate in Atheist Census?

To ensure that the data collected by Atheist Census is credible each person is only permitted to have one entry in Atheist Census.  While we cannot guarantee that each person has only one email address, this approach is a practical way to limit the risk of duplication.

6.     Why do I need to verify my information through the email confirmation?

To ensure that the data collected by Atheist Census is credible we need to check that a real person is behind each submission.

7.     What happens if I don’t validate my Atheist Census data?

Data that is not validated will be deleted after 24 hours and another entry associated with that email address may be made.

8.     How quickly will my data show up in Atheist Census?

If you think you haven’t received your validation email firstly please check your spam folder.  If you still haven’t received your validation email after a few hours please email us at info@atheistcensus.com from the same email address that you used for your Atheist Census entry and tell us.  We are aware of a small minority of situations where the validation email is sent but it appears to be blocked by settings on the recipient email server.  If you let us know, we can manually confirm your data so that you will be counted in Atheist Census.

We consider atheism to be a reasoned position, which requires that a person has seriously contemplated the concept of religion and concluded that they do not believe in any god.  This conclusion requires a certain level of intellectual maturity.  While individuals vary we have selected 15 as the minimum age at which we are comfortable that, on average, people have the capacity to reach this conclusion.

11.    What exactly do you mean by the titles atheist, freethinker, humanist etc – why don’t you provide definitions?

An atheist is simply someone who does not believe in any god, essentially, a non-religious person.  However, many people who are not religious prefer to use another title and that title may mean slightly different things to different people.  Rather than seek to impose AAI’s view of what those titles mean on people, we want to know which title people use to describe themselves.

12.    Which country am I “from” – country of birth or country of current residence?

13.    Wasn’t there another Atheist Census first?

The original Atheist Census launched in May 2012 but, unfortunately, ceased due to technical problems shortly after its launch.  AAI subsequently acquired and re-launched the project.

14.    I was counted in the first Atheist Census – can I be included in this one?

Yes!  No data has been retained from original Atheist Census.

15.    Where does the money donated to Atheist Census go?

AAI will use funds raised through Atheist Census to help cover development costs and pay for the ongoing technical requirements and marketing of the project.  Funds raised in addition to the needs of Atheist Census specifically will be used to support other projects by AAI to promote atheism and secularism around the world.  You can see more information on AAI’s projects at www.atheistalliance.org. 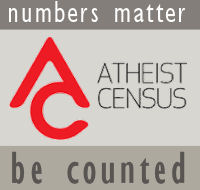 Never mind, you actually can see the breakdown by countries. There is pull down menu in which one can select the countries.

I'm surprised it hasn't hit even 200,000 worldwide yet. It needs to be publicized better.