Randall Smith commented on Michel's group The Daily Cosmos or Interesting Facts about the Universe
"Happy belated birthday, Spud! I have a couple more years to reach your age--hopefully! Enjoyed your…"
3 hours ago

Loren Miller commented on Adriana's group Freethought and Funny Bones
"About all I can say to this is: read Mary Trump's book ... but do so on an empty stomach."
4 hours ago

Loren Miller commented on Loren Miller's group Quote Of The Day
"I've searched my conscience, and I can't for the life of me find any justification for…"
4 hours ago

Mrs.B commented on Adriana's group Freethought and Funny Bones
"All revolting."
11 hours ago

Chris B commented on Adriana's group Freethought and Funny Bones
"They could have learnt by negative example..."
11 hours ago

Mrs.B commented on Adriana's group Freethought and Funny Bones
"Yes, they're all slime."
12 hours ago

Stephen commented on Adriana's group Freethought and Funny Bones
"Yes, I believe that also. And his sons are a piece of work as well."
12 hours ago

Mrs.B commented on Adriana's group Freethought and Funny Bones
"She's just as disgusting as her father."
12 hours ago

Chris B commented on Michel's group The Daily Cosmos or Interesting Facts about the Universe
"Congrats, Spud, I hope there're good times for you in this year! So perhaps I'm one of…"
12 hours ago

Stephen commented on Doone's group Humans of Earth and an Imbecile Named Scump News
"Short-termism in the extreme. But of course, Scump is only thinking till November."
16 hours ago

Mrs.B commented on Doone's group Humans of Earth and an Imbecile Named Scump News
"Re-imposed tariffs on our aluminum again, which with cut their own throats."
17 hours ago

Stephen commented on Doone's group Humans of Earth and an Imbecile Named Scump News
"Now Scump is giving away money in a tax cut and promised to keep doing so after the election.…"
17 hours ago

Joan Denoo commented on Michel's group The Daily Cosmos or Interesting Facts about the Universe
"I am 84-years young and making "good trouble."  No more of these nonsense thoughts…"
17 hours ago

Joan Denoo commented on Michel's group The Daily Cosmos or Interesting Facts about the Universe
"I'm a progressive, atheist, radical, trouble maker living in a conservative, agnostic,…"
17 hours ago

Stephen commented on A Former Member's group Animal | Vegetable | Mineral | Fungus
"Just heard on the radio that it is the international day of the Cat. If that's so happy cat day"
18 hours ago

Joan Denoo commented on Doone's group World History before that Idiot Took Power
"Doone, this site rings alp kinds of bells for me, the long-range perception of history and how it…"
18 hours ago

Idaho Spud commented on Loren Miller's group Quote Of The Day
"This is the first time I've seen that quote from Stephen Hawking.  I like."
18 hours ago

Spatial ability as a testosterone side effect 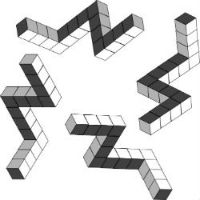 women and men work: spatial ability. It is basically the only difference that has been repeatedly measured with confirming results: males have on average a slightly better capacity with spatial tasks, especially the ability to note that a geometric figure is the same if rotated 180 degrees. Of course, there are overlaps and many women do better than men, but there is a statistically significant difference nevertheless, and it can be detected even in babies. Evolutionary biologists have speculated that it could be an adaptation: males need to navigate a bigger territory than female. If that was the case, other mammal species in which males forage or hunt over a larger territory should show spatial ability dimorphism. 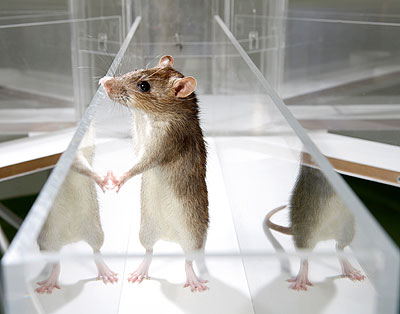 But it turns out that the most likely explanation is testosterone! If you castrate male rats, they no longer have an edge over females on navigating a maze. It appears that better spatial ability is actually a side effect of testosterone, just like acne. And nobody would argue acne was selected for, that it had an evolutionary advantage. What has an evolutionary advantage is plenty of testosterone, because the hormone is directly related to reproduction. We do not know what about testosterone results in slightly better spatial ability (though we know why a lot of testosterone gives you acne), but it is not likely to be an adaptation, but a spandrel. A spandrel is a term borrowed from architecture, that in evolutionary biology means a  characteristic that is the byproduct of another, evolutionarily selected for, trait.

Of Men, Navigation, and Zits

How, you may be asking yourself, is a good sense of direction like a bad case of acne?

Over many decades, psychologists have measured the minds of men and women, looking for similarities and differences. Reliable results are  notoriously hard to come by, because it can be very easy to find differences where none really exist. If you decided in 1970 to look at the fraction of scientific and medical Ph.D. awarded to women–under 5 percent–you might conclude that women’s brains just weren’t suited to the task. Today, that figure has reached about 50 percent. Women’s brains haven’t evolved over the past 40 years. Their social environment has.

Yet a few differences between the sexes do seem to hold up to scrutiny. One is spatial abilities. If men look at an object, for example, they are slightly faster at guessing what it would look like if it were rotated 180 degrees. There are plenty of women who do better than individual men. But overall there’s a statistically significant difference in their average performance. This kind of difference carries over from one culture to another. It’s even detectable in babies.

What accounts for the difference? Some scientists argue that it is an adaptation. Obviously, the evolution of the human race hasn’t hinged on being able to turn a stack of blocks around in our heads. But spatial abilities can have some far more practical benefits. If you can picture a landscape clearly in your head, you are less likely to get lost in it. People who score high on spatial ability tests also tend to do well on navigation tests. And in some studies (but by no means all), men do better at finding their way through a new place–be it a university building or a forest.