Loren Miller commented on Loren Miller's blog post Brian Tyler Cohen on Roe and a Pending SCOTUS Case
"The hell of it is, Stephen, justices on the court aren't SUPPOSED to bring their personal…"
4 hours ago

Stephen Brodie commented on Loren Miller's blog post Brian Tyler Cohen on Roe and a Pending SCOTUS Case
"Well said Brian Tyler Cohen. For the little knowledge I have about SCOTUS It's obvious…"
4 hours ago

Stephen Brodie commented on Hope's group Imagine No Organized Religion
"In this case Joan it's The Way of the Mister. See what he did there haha "
4 hours ago

Loren Miller commented on Loren Miller's group Quote Of The Day
"I would say so, GC!  Ingersoll sure knew how to string words together, didn't he?"
5 hours ago

This group is where you can post your favourite recipe, a heritage recipe hand down from mother to…See More
5 hours ago
284 Comments 3 Likes

Grinning Cat commented on Loren Miller's group Quote Of The Day
"Certainly a great summation of secular humanism!"
5 hours ago

Brian Tyler Cohen on Roe and a Pending SCOTUS Case

Brian Tyler Cohen has been producing political commentary on YouTube for the past couple of years. …See More
11 hours ago
2 Comments 2 Likes

Terence Meaden commented on Loren Miller's group Quote Of The Day
"It summarises concisely the thinking, bearing, and social conduct of a good atheist: Simple,…"
12 hours ago

Mrs.B commented on Loren Miller's group Quote Of The Day
"Have to agree there, Chris."
18 hours ago

Chris B commented on Loren Miller's group Quote Of The Day
"And I see the rot spreading..."
18 hours ago

Mrs.B commented on Davy's group Cuisine L'Internationale
"I stole a small slice before freezing, & the flavour is really good. Now I'll have to…"
yesterday

Mrs.B replied to Mrs.B's discussion 215 children have been found buried
"I don't know why they aren't running from the church in droves! My town had one of those…"
yesterday

Randall Smith commented on Davy's group Cuisine L'Internationale
"Interesting! I think I'd like it--love olives. Thanks for sharing."
yesterday

This group is where you can post your favourite recipe, a heritage recipe hand down from mother to…See More
yesterday
284 Comments 3 Likes

Loren Miller commented on Loren Miller's group Quote Of The Day
"Cicero had it on the nose.  Not only did Trump corrupt the office of the President, he pulled…"
yesterday

Dear AU friends, just when you thought the Catholic Church could not sink any lower, they select a new Pope with ties to the bloody, murderous right-wing military dictatorship in Argentina during the 70s and the 80s. He has been formally accused of human rights violations. I am beyond disgusted. If this guy had covered up pedophiles too, he would have been even better for the Catholic Church. BTW, this is not only reported by Think Progress, I posted this because everyone here reads English. The Latin American press and TV news are going to town with this story. Good for them.

The election of Jorge Mario Cardinal Bergoglio as Pope Francis I has sparked new interest in the atrocities performed during Argentina’s period of military rule from 1976-1983.

Francis is the first pope to have been elected from the Americas, which will more accurately reflect the primacy of the Roman Catholic Church in Latin America. That primacy, however, during the Cold War led to many dioceses throughout the region turning a blind eye to the atrocities of military governments. These right-wing governments, often taking power via coup, were supported by the United States and the church alike for their stand against Communism.

Particularly devastating was the period known in Argentina as as “The Dirty War.” Beginning as a crackdown on armed left-wing guerrilla groups following a military coup in 1976, the regime soon expanded its focus, imprisoning and torturing anyone thought to hold leftist views or criticize the government. Women who were pregnant at the time of their incarceration were allowed to bring their children to term, before being “transferred” — a euphemism used by the junta for execution — drugged and tossed from airplanes into the ocean. All-told, an estimated 30,000 civilians were “disappeared” by the government.

Years later, one priest told a panel of judges that the church at the time was “scandalously close to the dictatorship” in turning a blind eye, “to such an extent that I would say it was of a sinful degree.” Former Argentine dictator Jorge Videla claimed in an interview years removed from power that the Church was definitely “consulted” throughout the crackdown. That included offering their good offices and discouraging families from searching for relatives who had “disappeared.” That link was much stronger in Argentina than in neighboring dictatorships in Brazil and Chile:

“Patriotism came to be associated with Catholicism,” said Kenneth P. Serbin, a history professor at the University of San Diego who has written about the Roman Catholic Church in South America. “So it was almost natural for the Argentine clergy to come to the defense of the authoritarian regime.”

That tie has been a stain on Catholicism in Argentina ever since. The Argentine Catholic Church issued a document in 1996 admitting they had made “insufficient efforts” to prevent atrocities. When Pope John Paul II issued a blanket apology for church abuses throughout the ages in 2000, Bergoglio — by then the archbishop of Buenos Aires — insisted that Argentine Catholic officials wear garments symbolizing penance for sins committed by the clergy during the military dictatorship.

Bergoglio’s precise role during the Dirty War is still clouded. In 2005, when he was first considered as a possible replacement for John Paul II, a human rights activist accused Bergoglio of aiding in the military’s kidnapping of two Jesuits, filing criminal charges in a Buenos Aires court. That case has since not moved forward, though claims exist that he actively prevented human rights groups from finding political prisoners. However, at least one woman, former Buenos Aires Ombudsman Alicia de Olivia, has come forward to say that Bergoglio hid her from the military government during the crackdown.

Geography fail, from a CBS affiliate in Texas. 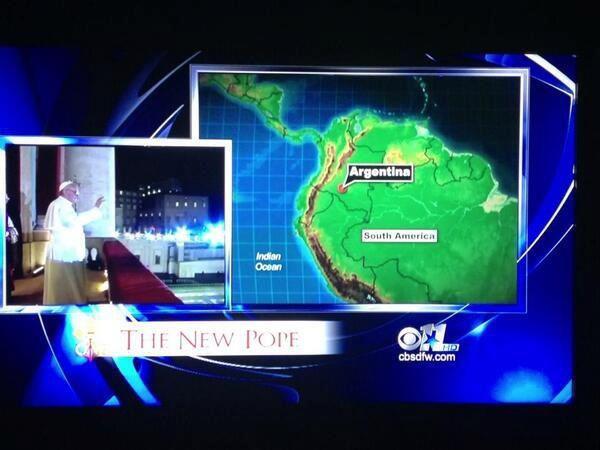 ike Old Testament prophets, dogged journalists from Argentina and around the world have raised concern about the election of Cardinal Jorge Bergoglio to become Pope Francis. Was he, they ask, complicit with the Argentine military that kidnapped, tortured, raped, killed, and "disappeared" tens of thousands of people starting even before the coup of March 1976? The victims included two bishops and as many as 150 priests and nuns, and the atrocities reached the absolute horror of stealing newborn babies from their mothers and throwing living prisoners from helicopters and airplanes into the South Atlantic.

The journalists are simply messengers. Most of their first-hand testimony come from sources within Argentina's divided Church and will not go away no matter how often Vatican spokesmen dismiss it as old smears spread by the anti-clerical left. We have heard this spin before, over both the Church's complicity with the Nazi Holocaust and early allegations of sexual abuse and cover-up. Pope Francis needs to do better than that. If he wants to put the dirty war behind him, he needs to provide full and convincing answers to nine deeply disturbing questions.

1. Gen. Jorge Rafael Videla, the imprisoned leader of the military junta, credits Papal Nuncio Pío Laghi, Archbishop Raul Francisco Primatesta, and other Church leaders with advising the military junta and helping handle the situation of the disappeared. "In some cases," the former dictator told Argentina's Revista El Sur, "the Church offered its good offices and told the relatives to give up searching for their child because he [or she] was dead." But the Church only did this, said Videla, "if it was certain that the relatives would not use the information politically" against the junta. How, Your Holiness, do you explain such close collaboration?

2. Church officials in Argentina have repeatedly asked forgiveness for their failure to speak out against the junta's human rights violations, and Bergoglio personally called for the Church to do public penance for the sins of the dirty war. The Church obviously lacked courage and moral clarity, but it was far from silent. It publicly supported the military junta. Cardinal Archbishop Juan Carlos Aramburu gave communion and his blessing to the newly installed dictator, Gen. Videla. Bishop José Miquel Medina, the head chaplain of the armed forces, and other church leaders justified torture, while providing chaplains to help the torturers overcome their moral qualms. In his visit to Buenos Aires in April 1982, Pope John II publicly embraced Videla's successor General Leopoldo Galtieri and refused to meet with the Mothers of the Plaza de Mayo, who were demanding justice for their disappeared relatives. When, Your Holiness, will the Church face up to the depth of its complicity?

3. In 2007, an Argentine court convicted Father Christian von Wernich, a police chaplain, for his complicity in seven murders, 42 abductions, and 31 cases of torture. According to BBC News, several former prisoners testified that he used his position as a priest to win their confidence and then passed what they told him to police torturers and killers. The former prisoners said that he attended several torture sessions and told the torturers that they were doing God's work. Von Wernich is now serving a life sentence. As archbishop, Bergoglio ruled against giving holy communion to politicians and health care workers who facilitate abortion, while allowing von Wernich to remain a priest and provide communion to his fellow prisoners. Does Your Holiness truly believe that Church doctrine on abortion and contraception is more important to uphold than prohibitions against torture and mass murder?