Loren Miller commented on Loren Miller's group Quote Of The Day
"Atheism is a religion like abstinence is a sex position. -- Bill Maher And like bald is a hair…"
4 hours ago

Mrs.B commented on Julien's group The Music Box
"This is music from the north-eastern part of India and not Bollywood. The language is Assamese :…"
7 hours ago

Idaho Spud commented on Adriana's group Science!
"The Human journey was interesting.  Thanks Stephen."
16 hours ago

Mrs.B commented on Loren Miller's group Quote Of The Day
"Yes!"
21 hours ago

Loren Miller commented on Julien's group The Music Box
"Some time back, Billy Joel wrote a beautiful lullaby for his daughter, which he then released on…"
yesterday

Loren Miller commented on Loren Miller's group Quote Of The Day
"I have my beliefs, you have your beliefs, but don't use the machinery of government to impose…"
yesterday

Loren Miller commented on Loren Miller's group Quote Of The Day
"Which is it, is man one of God’s blunders or is God one of man’s? -- Friedrich Wilhelm…"
Wednesday

Chris B commented on Adriana's group Freethought and Funny Bones
"A great one, Patricia!"
Wednesday

Ian Mason commented on Sydni Moser's group Coffee Break
"Boghossian has been very provocative with the goal of creating debate over several years, including…"
Wednesday

Chris B commented on Sydni Moser's group Coffee Break
"That's disgusting! That is breaking down science from inside out!"
Wednesday

For some reason, the subject of incivility and cruel behavior in social media sites fascinates me. I think it does say quite a bit about human behavior and what happens when you change social interactions in a radical way, very, very quickly. At the risk of sounding too much like an evolutionary psychologist, it seems that once you remove the closeness, the in-the-flesh interactions that we evolved to need and that are necessary for thriving as a member of our species, many aspects of our behavior go completely out of whack. And to reverse-paraphrase Steven Pinker, the "better angels" of our nature get totally beat up by the "worse demons" of our nature. It certainly seems that empathy and inclusiveness get trampled by cruelty and tribalism. At the same time, social media allow for many good causes that appeal to the "better angels" of our nature, to actually exist and be effective, such as relief for natural disasters victims, campaigns pro-human rights, etc. I'm not trying to say social media is the bane of civilization. I do enjoy interacting with people through social media very much, and I find it an enriching experience because I can "meet" people from all over the world and learn their perspectives.

Perhaps the problem lies in lack of "policing" as in "social policing." What I mean by that is the kind of community effect that comes from knowing that other people are watching (and judging) our behavior, the kind of phenomenon described by Philip Zimbardo in The Lucifer Effect, that anonymity stimulates destructive behavior. Many social networking sites do not moderate very effectively or moderate too late, once the interactions have escalated in intensity and nastiness. 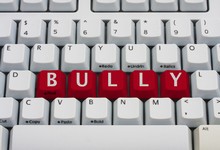 I was prompted to write this discussion because of an article about meanness or extreme rudeness on Twitter (you should read it, it has gossip galore), and I want to have your opinions or thoughts on this important issue. The article says that perhaps the same ferocious incivility was happening but we just could not see it because it wasn't so hugely public. At the same time, the article compares online incivility to road rage, a case of rational people behaving irrationally. It's possible. Here are some excerpts I thought interesting:

But Reynol Junco, a psychologist and social media researcher at Harvard University's Berkman Center for Internet and Society, believes the Twitter haters have it all wrong. In a phone interview, he called the idea of blaming social media for incivility “absurd,” and he pointed to Twitter’s prominent role in the last election as evidence that social media actually improves civic engagement. “A lot of this is about perception,” he said. “People assume that because we couldn’t see all this incivility before Twitter that it wasn’t happening, but these exchanges are reflective of conversations that are happening in the real world.”

And on the subject of social conventions and self-regulation as a community, perhaps shunning the offenders (the oldest form for human communities to punish transgressors, cheaters, etc.) is simply going to transfer from the real world into the online world, and that will solve the issue:

In fact, according to Weber Shandwick’s study, more than half of Americans say they are “tuning out” media because of what they consider uncivil commentary. (Are you paying attention, Rupert?) That same study also suggests that incivility on Twitter, in the long term, may be equally shunned. Half of Americans now say they have de-friended or blocked someone online because of incivility, while more than a quarter have dropped out of an online community completely. Junco cautioned that “trolls are just a part of the Internet space,” but he added that new technologies like social media should never be discounted simply because people have figured out ways to abuse them. He cites Carl Sagan, who famously believed that humans will one day venture to the stars -- that is, if we don’t kill each other first.

And on the subject of social conventions and self-regulation as a community, perhaps shunning the offenders (the oldest form for human communities to punish transgressors, cheaters, etc.) is simply going to transfer from the real world into the online world, and that will solve the issue:

That would seem to be the answer. Think of the identification and definition of "troll;" the weeding process has been in process for awhile.  Moderators are the online civility ensurers. Not censors of ideas, but possibly censors of assholiness. Online communities could evolve to be stronger communities than face to face. Anonymous means no color or ethnic bias, no gender bias, etc. We can picture a commenter by his posts without prejudice.

I think shunning incivility is a good way of reacting whether online or face to face, but I also think sometimes you have to go further, meaning pointing out to the person how damageable his words or acts can be.

Yes, I agree, sometimes one needs to be vocal and let people know how their comments are hurting people or worse, putting people off the discussion!

Anonymity to me I think is the greatest driver for all this. I can be anyone I want to be under the banner of anon

Cyberstalking is an extreme form of incivility, it's a bullying behavior. And I'm glad it's punishable by law. From Ophelia Benson's blog:

So you’re not allowed to do that?

Polk County Sheriff Grady Judd does not take internet bullying of its residents lightly, even if it involves EllenBeth Wachs, the former Vice-President and Legal Affairs Coordinator for Atheists of Florida and current President of Humanists of Florida Association, who recently asked the sheriff to investigate a relentless case of cyberstalking aimed against her.

Judd assigned a Special Investigations detective to investigate a North Carolina man who has, for almost two years, employed an arsenal of social media such as Facebook, Youtube, Google+ and Twitter, to conduct a relentless campaign to harass and abuse Wachs.

But you’re allowed to do that, aren’t you? It’s free speech, isn’t it?

According to Florida statutes the term “cyberstalk” means “to engage in a course of conduct to communicate, or to cause to be communicated, words, images, or language by or through the use of electronic mail or electronic communication, directed at a specific person, causing substantial emotional distress to that person and serving no legitimate purpose.”

Such activity is a first degree misdemeanor or, if a credible threat is conveyed, a third degree felony. Earlier this month, sheriff detectives arrested two Polk County men under the Florida cyberstalking statute for harassing a 15-year-old high school student via Twitter.

But but but harassing people is a glorious part of our glorious tradition of free speech!

On the web, the avatar veil allows an immature ignoramus to have as much (if not more) traction as a sensical and socially responsible adult.

I experience intense pleasure from brutally captioning some videos or articles I share on twitter after watching or reading those. If I would discuss the same subject with friends, my choice of words would convey the same disdain, but I would use many more words and a totally different choice of idiom. Twitter limits the number of characters I can use to express myself, so I have to deliver my message short and sharp.

Permalink Reply by Adriana on December 8, 2012 at 10:40am
I follow you on Twitter and I've never seen one of your uncivil tweets! What am I missing? LOL. Now, more seriously, I'm not sure we are talking about the same kind of incivility. I think you a referring to satire or snide remarks, while the article refers to direct, super rude comments like those by the celebrities mentioned in the article.

I sometimes use some descriptive (LOL) words I would ordinarily not use at home! For example: When I post a link to an article or video by an extreme Televangelist or The Family Research Council, I usually add a choice derogatory word to the heading to distance myself from the subject.

Michigan works had a FB page set up for comments on the union bashing bills in MI. The most popular thread was started by this jackass from Jackson MI. Trailer trash type, avatar is a pic of a shirtless fat fuck, him I guess, with that stupid moronic fucking grin that all conservatives wear as identification. His post started off with the line "Let me keep this simplistic for all you union thug loving business hating blah blah blah. They had a dozen trolls pissing everyone off, mostly from out of state. Either out of state, or no data on their timeline showing where they were from.

Incivility online comes from conservatives as far as I can tell. Wherever they are they bring hate and discord.

And yes, I do get excited every so often. =)