Loren Miller left a comment for Stephen Brodie
"Thanks, Stephen.  Have to say, I don't FEEL all that old.  The physiology still…"
5 minutes ago

Stephen Brodie commented on Adriana's group Freethought and Funny Bones
"A Christian apologist doesn't have any luck from his imaginary friend. The bell tolls for this…"
32 minutes ago

Stephen Brodie left a comment for Loren Miller
"Happy birthday Loren. I do hope you'll have a lovely day. Remember we shouldn't…"
41 minutes ago

Randall Smith commented on Loren Miller's group Quote Of The Day
"I love it: "spirituality is purely bogus". I've always hated hearing that. And a…"
1 hour ago

Terence Meaden commented on Loren Miller's group Quote Of The Day
"Lovely, uplifting words, and a Happy Birthday to Yooooooouuuuuuu, Loren. I have written numerous…"
1 hour ago

Chris B commented on Loren Miller's group Quote Of The Day
"I couldn't agree more, Loren! Congrats, and a happy day to you! How long will you remain Jr.?"
1 hour ago

Loren Miller commented on Loren Miller's group Quote Of The Day
"The argument for a “natural need” for spirituality I think is purely bogus. There are…"
2 hours ago

RichardtheRaelian left a comment for Adriana
""Happy Birthday!""
8 hours ago

Chris B commented on Sydni Moser's group Coffee Break
"Just as horrible as when I was made to listen to that stuff in church when I was very young."
9 hours ago

Mrs.B commented on Loren Miller's group Quote Of The Day
"And great nurses administering the chemo....which was a 4 hour session each time."
11 hours ago

Stephen Brodie commented on Loren Miller's group Quote Of The Day
" Mrs.B and Terence there are two things I feel when I hear of stories like…"
12 hours ago

Mrs.B commented on Loren Miller's group Quote Of The Day
"Yes, Terry, I remember your speaking of it back in the Nexus days. Obviously you're doing well…"
13 hours ago

Terence Meaden commented on Loren Miller's group Quote Of The Day
"Well done Mrs B. It shows how the power of non-prayer combined with excellent medical attention can…"
13 hours ago

Ian Mason commented on Sydni Moser's group Coffee Break
"I found some old posts on FB. The 'nasty' god wrote this even worse version of the 10…"
18 hours ago

Mrs.B commented on Loren Miller's group Quote Of The Day
"I had 2 types of breast cancer in 2005, with full mastectomy, 2 infections, & 5 years of…"
18 hours ago

Grinning Cat commented on Loren Miller's blog post Brian Tyler Cohen on Roe and a Pending SCOTUS Case
"Rather, Rebalance and Enlarge the Court!!! (The "Packing" was already done by…"
18 hours ago

Great New York true story: "We Found our Son in the Subway"

This may not have anything to do with atheism, but it has a lot to do with the great things human can achieve when they are being compassionate, when they value solidarity, when we behave towards other humans with empathy and respect. This is a great example of why we must do away with prejudices, like the ones instilled by the Bible, in this case, homophobia. This story is true, and it's going viral. I dare you to read it, and not end up all teary eyed, in a good way. If you were having a bad day, this will restore your faith (in a non-religious meaning, of course) in humanity. From the NYT Opinionator blog:

We Found Our Son in the Subway

The story of how Danny and I were married last July in a Manhattan courtroom, with our son, Kevin, beside us, began 12 years earlier, in a dark, damp subway station.

Danny called me that day, frantic. “I found a baby!” he shouted. “I called 911, but I don’t think they believed me. No one’s coming. I don’t want to leave the baby alone. Get down here and flag down a police car or something.” By nature Danny is a remarkably calm person, so when I felt his heart pounding through the phone line, I knew I had to run.

When I got to the A/C/E subway exit on Eighth Avenue, Danny was still there, waiting for help to arrive. The baby, who had been left on the ground in a corner behind the turnstiles, was light-brown skinned and quiet, probably about a day old, wrapped in an oversize black sweatshirt.

In the following weeks, after family court had taken custody of “Baby ACE,” as he was nicknamed, Danny told the story over and over again, first to every local TV news station, then to family members, friends, co-workers and acquaintances. The story spread like an urban myth: You’re never going to believe what my friend’s cousin’s co-worker found in the subway. What neither of us knew, or could have predicted, was that Danny had not just saved an abandoned infant; he had found our son. 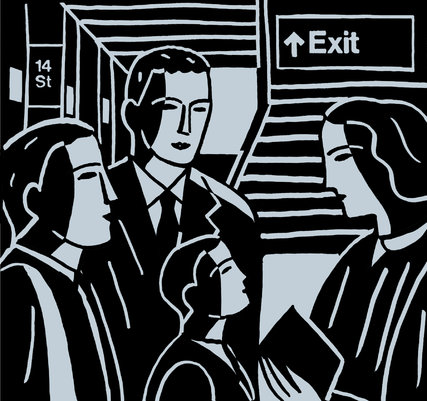 Three months later, Danny appeared in family court to give an account of finding the baby. Suddenly, the judge asked, “Would you be interested in adopting this baby?” The question stunned everyone in the courtroom, everyone except for Danny, who answered, simply, “Yes.”

“Well, it can be,” assured the judge before barking off orders to commence with making him and, by extension, me, parents-to-be.

My first reaction, when I heard, went something like: “Are you insane? How could you say yes without consulting me?” Let’s just say, I nailed the “jerk” part of knee-jerk.

In three years as a couple, we had never discussed adopting a child. Why would we? Our lives were not geared for child rearing. I was an aspiring playwright working as a part-time word processor and Danny was a respected yet wildly underpaid social worker. We had a roommate sleeping behind a partition in our living room to help pay the rent. Even if our financial and logistical circumstances had been different, we knew how many challenges gay couples usually faced when they want to adopt. And while Danny had patience and selflessness galore, I didn’t. I didn’t know how to change a diaper, let alone nurture a child.

But here was fate, practically giving us a baby. How could we refuse? Eventually, my fearful mind spent, my heart seized control to assure me I could handle parenthood.

BTW This is the link for the rest of the story:

(Not Alternet, the NYT)

I just love that story.

At the end, it made me tear just at the beauty and simplicity of it all. I sometimes have hope for humanity and this one of those times :)

Great story. When I hit the link at the bottom it took me to the story about the Mississippi dude being killed. Changed it.