Joan Denoo commented on Sydni Moser's group Coffee Break
"Mrs.B. thanks for the music leads; I'll try them out. "
8 minutes ago

Joan Denoo commented on Sydni Moser's group Coffee Break
"Mrs.B. I know, we have been hunkering down a very long time. Do you remember the polio outbreaks,…"
15 minutes ago

Mrs.B commented on Sydni Moser's group Coffee Break
"My taste in music is huge, so I wouldn't know what to suggest. I have 60 cd channels [not…"
18 minutes ago

Joan Denoo commented on Sydni Moser's group Coffee Break
"Mrs.B, thanks for your ideas! Do you have favorite music; I am not much of a listener to music and…"
24 minutes ago

Mrs.B commented on Doone's group Humans of Earth News
"Modern is not always better."
27 minutes ago

Mrs.B commented on Sydni Moser's group Coffee Break
"I do many of those.  Bake bread. Find a new recipe. Move to some music."
28 minutes ago

Stephen Brodie commented on Doone's group Humans of Earth News
" Doone. I remember that poster plastered on the wall near the Shaftesbury Avenue exit of…"
31 minutes ago

Joan Denoo commented on Sydni Moser's group Coffee Break
"While hunkered down until CLOVID is under control, here are some options. Please add your…"
35 minutes ago

Ruth Anthony-Gardner replied to Ruth Anthony-Gardner's discussion Ominous Scale of Environmental Erosion in the group Science!
"“Humanity is running an ecological Ponzi scheme in which society robs nature and future…"
49 minutes ago

Joan Denoo commented on Sydni Moser's group Coffee Break
"Ian Mason, according to the article you shared, "To effectively stop the virus, the…"
1 hour ago

Mrs.B commented on Sydni Moser's group Coffee Break
"We've been ''hunkered down hard'' for nearly 11 months, only going out for…"
1 hour ago

Ian Mason commented on Sydni Moser's group Coffee Break
"Stay safe, everyone. DK has got off fairly lightly but we're locked down for the second time,…"
1 hour ago

Mrs.B commented on Loren Miller's group Quote Of The Day
"Wishing over birthday candles didn't even work 50% of the time...hahahahaha....."
2 hours ago

Mrs.B commented on Sydni Moser's group Coffee Break
"All of it is too close. Your situation is worrisome too, Chris."
2 hours ago

Randall Smith replied to Ruth Anthony-Gardner's discussion Ominous Scale of Environmental Erosion in the group Science!
"Wow--I didn't know Paul Ehrlich was still alive! He has always been concerned about our…"
8 hours ago

Most of you have probably discussed this when it was voted to ban the full-face veil, last summer. I found it interesting that Americans had a very different perspective than Europeans on this issue. I would love to learn about the opinions of Atheist Universe members, of different parts of the world.

PARIS — A French ban outlawing full-face veils in public, the first to be enacted in Europe, came into force on Monday and faced immediate, if low-key, challenges.

French police escorted Kenza Drider, center, a French Muslim of North African descent, away from the square outside Notre Dame Cathedral in Paris on Monday.

Kenza Drider, in a railway station in Paris on Monday, has been an outspoken supporter of women being allowed to wear face-covering veils in France.

The police detained two fully veiled women at a small protest outside the Notre Dame cathedral in central Paris, where demonstrators were easily outnumbered by police officers and journalists. But it was not clear whether the women had been held under laws forbidding unauthorized demonstrations.

The new law, approved last year, has been controversial from the start, raising questions about France’s relationship with its Muslim minority of five to six million — Western Europe’s largest — at a time when right-wing and anti-immigrant sentiment is on the rise.

Just days ago France‘s governing party pressed ahead with a contentious public debate on the nature of its secularist philosophy and the challenges of Islam. The discussion drew criticism across a broad front including government officials, religious leaders, the Socialist opposition and the far-right National Front.

According to the French authorities, fewer than 2,000 women in France wear the full-face veil, known as a niqab, but the ban has touched nerves, prompting accusations that it stigmatizes one gender among one religious minority in a land that prides itself on the values enshrined in its national motto of liberty, equality and fraternity.

The ban also applies to foreigners visiting France. The law forbids clothing intended to hide the face in public spaces such as streets, markets, private business, government buildings and public transportation. Violators may be punished with a fine of 150 euros, equivalent to $215. But people forcing others to cover their faces are subject to much stiffer punishments, including a maximum 12 months in prison and a fine of 30,000 euros, equivalent to more than $42,000, or twice that amount if the person forced to cover their face is a minor.

News reports said a Muslim property dealer had set aside a fund of some $2.8 million to help women fight the ban while a woman wearing a niqab planned to travel by train from Avignon in southern France to Paris in defiance of the prohibition.

Rachid Nekkaz, the property developer who called for the protest at the cathedral, said in a Webcast quoted by Reuters: “I am calling on all free women who so wish to wear the veil in the street and engage in civil disobedience.”

Police officers have been told by their superiors that they may not forcibly remove veils, but offenders may be taken to police stations to have their identities confirmed.

In some public debate, the niqab has been conflated with the full-body covering called a burqa, which is very rare in France. As debate flared over the law last year, Jean-François Copé, the parliamentary leader of President Nicolas Sarkozy’s party, defended the bill on the grounds of public security and as an important assertion of French identity and values. Mr. Sarkozy himself has said, “The burqa is not welcome in France because it is contrary to our values and contrary to the ideals we have of a woman’s dignity.”

When the law was approved by the lower house of Parliament last year, there was only one opposing vote, cast by Daniel Garrigue, an opponent of President Sarkozy, who said: “To fight an extremist behavior, we risk slipping toward a totalitarian society.”

Permalink Reply by Adriana on April 11, 2011 at 12:46pm
Heated debate going on now at Amnesty International Facebook page. Some interesting comments there.

Permalink Reply by Adriana on April 11, 2011 at 12:57pm
I have noted in those comments that secular people from Muslim origin are the most vocal IN SUPPORT of the ban. It makes sense to me.

Though the ban is for reasons other than this, maybe it will actually turn out to be good for those women.  Let your pretty faces be seen girls!  Breathe some fresh air!  Feel a little brazen!

Permalink Reply by Adriana on April 16, 2011 at 8:33pm
I think this WILL happen as a result of the ban, maybe not to everybody, but to many of them.

*women take off their hijab and wear it again

Some of them were wearing the veil and then they take it off and vice versa!

like Hala Shiha and Mirna El Mohandes from Egypt. 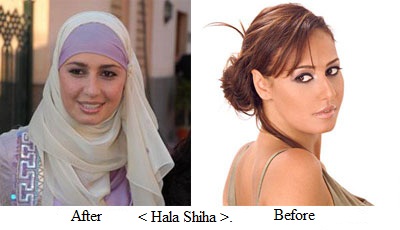 Choosing to wear the veil has nothing to do with the religion itself.

maybe it's fashion or sothing haha :)

Permalink Reply by Adriana on April 17, 2011 at 9:53am
I have to tell you that the hijab can be a sexy garment, I have no issue with that, women smile, you see their aces, I have no problem with that, my problem is the complete covering; those two women are beautiful with and without the head scarf.

I used to be conflicted but I have made up my mind now and I approve of the ban. I think it is never (or almost never) the woman's choice to completely depersonalize herself by these extreme ways of covering their faces and bodies; even n "super-free"  America we restrict people's way of dressing, we cannot go to the beach topless like in European beaches, yet nobody is saying that we lose our freedoms.

The niqab or burka send a horrible message o all women and to all little girls, Muslim or not, that we are different, we must cover, there is something intrinsically bad in our faces and bodies, make no mistake. And we are not restricting people's religious freedoms because the majority of Muslim scholars agree full covering is NOT a requirement.

Unfortunately I'm sure some people approve of the ban because they dislike foreign customs, you find those fascists everywhere, but I don't think this is the point here. I'm no fan of Sarkozy but when people I don't like do the right thing, I'm intellectually obliged to myself to be honest and support the measure.

I do not know why this angers Muslims!?

In the end are immigrants, and why they chose to live in France when they are extremists!

Extremism and Liberty can not come together!

I know it will be difficult for those women who are accustomed to wearing niqab..

But they will get used to it... after all they must respect the government decision.

France is a liberal european country and wearing niqab will be ugly there in France!

On the other hand,

In Saudi Arabia even foreign women must wear an abaya outside the home..

Good thing that it's okay for foreign women not cover their hair.

Yes the full body / face burqa should be banned. Women never choose to wear this garment and have no power to change the Male Muslim world. If a country can ban it they should and maybe this will give some power to those women to force change. Who can really tell if it is a man or women behind the vail – this alone makes it a security issue.

Maybe France should TAX those persons who want to hide in this manner in public.

Mimorina (what a beautiful name!), thanks for your answer! There was a page at Amnesty International (who does NOT support the ban) and there was a big contrast between the American commenters on the page, all talking about the "freedom to wear a burka or niqab" and ex-Muslims and also Europeans who pretty much agreed with your comment 100%.

One can't discuss about these things in a vacuum, this is not about an "ideal", it is about people, real people.

Permalink Reply by mimorina on April 17, 2011 at 10:57am
i have a friend that wear the burqa since she was 15 years old and she absolutely heats it  she has a boyfriend and they meet secretly and she has a phone and a fecebook page but if her dad know about all that im sure its going to be the end of her life . and i know other women who wears burqa to seem clean and everything but they sleep with men for money and we have alot of them here and there is they type of women who are just forced to wear burqa . anyway here in my place almost no one like them .

About those bad women who do nasty> remember their actions represent themselves only..you know that.

remember also, self-censorship is an art.