Chris B commented on Sydni Moser's group Coffee Break
"I enjoyed that, thanks Stephen!"
4 hours ago

Loren Miller commented on Loren Miller's group Quote Of The Day
"The moment you say that any idea system is sacred, whether it’s a religious belief system or…"
23 hours ago

Chris B commented on Doone's group World History
"Great! I enjoyed the mosaics in Naples enormously and this is just as beautiful!"
yesterday

Chris B commented on Sydni Moser's group Coffee Break
"That explains a lot, thanks! Such a destruction!"
yesterday

Stephen Brodie commented on Loren Miller's group Quote Of The Day
"Good to see you back Joan hope everything is good with you."
yesterday

I think both theists and atheists don't realize the full ramifications of Russell's Teapot. I would…See More
yesterday
0 Comments 0 Likes

Mrs.B commented on Sydni Moser's group Coffee Break
"I swam in this lake years ago."
yesterday

Mrs.B commented on Loren Miller's group Quote Of The Day
"Good to see you, Joan."
yesterday

Joan Denoo commented on Loren Miller's group Quote Of The Day
"Thanks, Dan Baker, for your wisdom! And thanks, Loren, for your post. "The agnostic says,…"
yesterday

Can Healthy Food Eaters Stomach the Uncomfortable Truth About Quinoa?

Apparently whatever I eat is going to hurt someone in the world. Capitalism doesn't seem to work without suffering for some. I have this awesome quinoa recipe I was going to post, now I need to change the grain.

The people who first cultivated the grain can't afford to eat it.
January 18, 2013 |

Not long ago, quinoa was just an obscure Peruvian grain you could only buy in wholefood shops. We struggled to pronounce it (it's keen-wa, not qui-no-a), yet it was feted by food lovers as a novel addition to the familiar ranks of couscous and rice. Dieticians clucked over quinoa approvingly because it ticked the low-fat box and fitted in with government healthy eating advice to "base your meals on starchy foods". 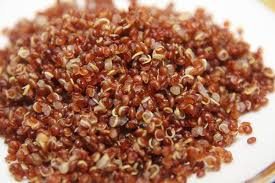 bitter taste and the little white curls that formed around the grains. Vegans embraced quinoa as a credibly nutritious substitute for meat. Unusual among grains, quinoa has a high protein content (between 14%-18%), and it contains all those pesky, yet essential, amino acids needed for good health that can prove so elusive to vegetarians who prefer not to pop food supplements.

Sales took off. Quinoa was, in marketing speak, the "miracle grain of the Andes", a healthy, right-on, ethical addition to the meat avoider's larder (no dead animals, just a crop that doesn't feel pain). Consequently, the price shot up – it has tripled since 2006 – with more rarified black, red and "royal" types commanding particularly handsome premiums.

But there is an unpalatable truth to face for those of us with a bag of quinoa in the larder. The appetite of countries such as ours for this grain has pushed up prices to such an extent that poorer people in Peru and Bolivia, for whom it was once a nourishing staple food, can no longer afford to eat it. Imported junk food is cheaper. In Lima, quinoa now costs more than chicken. Outside the cities, and fuelled by overseas demand, the pressure is on to turn land that once produced a portfolio of diverse crops into quinoa monoculture.

More on this, from the Columbia Journalism Review.

A slanted post about the quinoa craze set off a cascade of reproachful media warnings last week, telling consumers that by eating the grain-like vegetable they are hurting people in the Andean region where most of it is grown.

The article, by The Guardian's Joanna Blythman, drew upon reports that quinoa's popularity in the Western world has made it unaffordable in parts of Bolivia and Peru where it was once a dietary staple, raising concerns about malnutrition in some places. "In fact," Blythman wrote, "the quinoa trade is yet another troubling example of a damaging north-south exchange, with well-intentioned health- and ethics-led consumers here unwittingly driving poverty there."

And such was the simplistic story uncritically echoed by the likes of Andrew Sullivan and The Globe and Mail, which chose the censorious headline, "The more you love quinoa, the more you hurt Peruvians and Bolivians."

But there's more to it.

The shortsightedness of Blythman's piece is surprising, given that it jumps off from a much more comprehensive one that The Guardian had published just two days earlier. That article, by Dan Collyns, addressed the concerns about malnutrition (as well as those about disputes over farming in the Andes, which has become a problem), but added some important context.

Quinoa has also enriched many Bolivians. And while the government reported in 2011 that local consumption had declined 34 percent, its price, which had tripled, was only part of the problem. As incomes increased, many people simply switched to processed, Western-style foods. The primary worry is about children in poor parts of the country. Bolivia cut chronic malnutrition in children under five from 22.9 percent in 2005 to 16.5 percent in 2011, but it remains higher in rural, Andean regions, and there is a broad effort underway to address the problem. According to Collyns:

This year is the UN's International Year of Quinoa as the UN Food and Agriculture Organisation recognises the crop's resilience, adaptability and its 'potential contribution in the fight against hunger and malnutrition.'

... the Bolivian government - which like its neighbour Peru is heavily promoting quinoa nationally to combat malnutrition - insists Bolivians are eating more of the grain. Annual consumption per person has increased fourfold from 0.35kg to 1.11 kg in as many years "in spite of the high international prices," Victor Hugo Vásquez, Bolivia's vice-minister for rural development and agriculture, said.

Following Blythman's piece, Mother Jones's food reporter Tom Philpott attempted to put quinoa lovers at ease with a helpful article headlined, "Quinoa: Good, Evil, or Just Really Complicated?" And he took a fair jab at the condescending headline of Blythman's piece--"Can vegans stomach the unpalatable truth about quinoa?"--by pointing out that it isn't just vegans who enjoy it.

Not only did Blythman's article encourage a bunch of equally blinkered copycat posts (and a concerned question on Quora), she also provoked ill-informed responses that rushed to the other side of judgment about the situation in the Andes. Criticizing what he called "the killer-quinoa meme," The Globe and Mail's Doug Saunders wrote:

The people of the Altiplano are indeed among the poorest in the Americas. But their economy is almost entirely agrarian. They are sellers - farmers or farm workers seeking the highest price and wage. The quinoa price rise is the greatest thing that has happened to them.

Responding to the polarity in the coverage, Marc Bellemare, an agricultural economist at Duke University, suggested that the problem is not so much with Western foodies as it is with journalists:

Indeed, it is impossible to know who is right and who is wrong between Blythman and Saunders without knowing the answers to a number of questions:

Such detailed information has been lacking in the coverage of the quinoa market's impact on the Andes. Nonetheless, there has been some well-balanced reporting in the last few years. NPR did one of the first such piece in January 2011, followed by The New York Times in March of that year and Time in April 2012.

And that coverage has, in turn, prompted a lot of interesting online discussion about the finer points of the situation between agricultural scientists and international development workers. As we've seen with crops from coffee to soy, a spike in global demand can have many negative impacts on the areas that cultivate them.

So far, the problems in the Andes seem relatively mild, but they're there. As Philpott put it, "That doesn't mean we should stop eating quinoa; it just means we shouldn't eat quinoa without thinking it through." Likewise, journalists shouldn't stop covering the problems there, they should just stop covering them without... well, you know the rest.