Joan Denoo commented on Sydni Moser's group Coffee Break
"Stephen, the "public lavatories, like this one in Pond Square, Camden, London," is…"
4 hours ago

Mrs.B commented on Sydni Moser's group Coffee Break
"Yes, our kitties were not happy with our last storm either."
7 hours ago

Ian Mason commented on Sydni Moser's group Coffee Break
"A pigeon sheltering from the rain on my balcony. It doesn't seem to care about me being there…"
7 hours ago

Ian Mason commented on Sydni Moser's group Coffee Break
"We've had rain, thunder and lightning in DK today but nothing as severe. Stay safe, everybody."
7 hours ago

Loren Miller commented on Randall Smith's group Just sports stuff.
"Hell, the Braves logo is at least as egregious as Chief Wahoo.Here's a poser for you, though:…"
8 hours ago

Randall Smith commented on Randall Smith's group Just sports stuff.
"Loren, thanks for your input. Next, Atlanta (Braves), although some might claim that…"
16 hours ago

Loren Miller commented on Loren Miller's group Quote Of The Day
"Since Jimmy Carter, religious fundamentalists play a major role in elections. He was the first…"
16 hours ago

I hope anyone who reads this photo quote can find inspiration from the words contained in it.
17 hours ago
0 Comments 0 Likes

Chris B commented on Sydni Moser's group Coffee Break
"It keeps you constantly on alert, very bad! And the London weather!"
23 hours ago

Mrs.B commented on Sydni Moser's group Coffee Break
"Oh crap! So many apartment fires are started by bbq's, so there's a good reason to ban…"
yesterday

Stephen Brodie commented on Sydni Moser's group Coffee Break
"No thankfully. Last night there was a terrible smell of smoke wafting through the building and you…"
yesterday

Mrs.B commented on Sydni Moser's group Coffee Break
"Ok, so your lobby etc., is not likely to flood then."
yesterday

Stephen Brodie commented on Sydni Moser's group Coffee Break
"If you remember Abbey Road is nearly at the top of the hill(St. Johns Wood) and Maida Vale is about…"
yesterday

Mrs.B commented on Loren Miller's group Quote Of The Day
"I don't want to have faith, I want to know, as someone once said."
yesterday

Loren Miller commented on Randall Smith's group Just sports stuff.
"Yeah, I saw that.  Initially, I thought it was a thoughtless nothing-burger, had NO idea where…"
yesterday

Loren Miller commented on Loren Miller's group Quote Of The Day
"To me, the bottom line is honesty. A person with integrity doesn’t claim to know supernatural…"
yesterday

A mathematical model of obesity

The New York Times published today a fascinating interview with mathematician Carson Chow from the National Institute of Diabetes, Digestive and Kidney Diseases (NIDDK), who has developed an equation that describes the problem of obesity and how American became so overweight in such a short period of time. He explains that a mathematical model may give an answer to the question much faster than experimental work or field work. He openly admits that the food industry lobby will not like his conclusions. According to Chow, it's the overproduction of food and the fact that it became so inexpensive that is causing this epidemics. Among the many surprising things his model predicts, is that if you're already obese, even an increase of 10 calories per day over long periods will cause you to gain more weight than if you are of normal weight and consume an extra 10 calories, every day. His model also predicts that humans are slow to respond to calorie intake changes, and that what counts is the # of calories consumed over the course of a year, not really daily variations in the food intake. I recommend reading the whole interview, is very interesting.

A CONVERSATION WITH CARSON CHOW

A Mathematical Challenge to Obesity 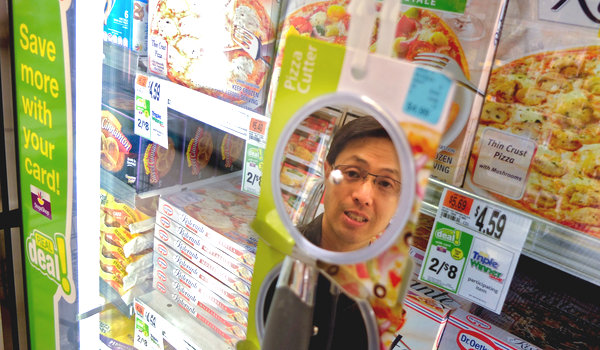 FIGHTING OBESITY Carson Chow at a supermarket. Dr. Chow, a mathematician, has found that a food glut is behind America’s weight problem.


Carson C. Chow deploys mathematics to solve the everyday problems of real life. As an investigator at the National Institute of Diabetes and Digestive and Kidney Diseases, he tries to figure out why 1 in 3 Americans are overweight.

We spoke at the recent annual meeting of the American Association for the Advancement of Science, where Dr. Chow, 49, gave a presentation on “Illuminating the Obesity Epidemic With Mathematics,” and then later by telephone; a condensed and edited version of the interviews follows.

You are an M.I.T.-trained mathematician and physicist. How did you come to work on obesity?

In 2004, while on the faculty of the math department at the University of Pittsburgh, I married. My wife is a Johns Hopkins ophthalmologist, and she would not move. So I began looking for work in the Beltway area. Through the grapevine, I heard that the N.I.D.D.K., a branch of the National Institutes of Health, was building up its mathematics laboratory to study obesity. At the time, I knew almost nothing of obesity.

I didn’t even know what a calorie was. I quickly read every scientific paper I could get my hands on.

I could see the facts on the epidemic were quite astounding. Between 1975 and 2005, the average weight of Americans had increased by about 20 pounds. Since the 1970s, the national obesity rate had jumped from around 20 percent to over 30 percent.

The interesting question posed to me when I was hired was, “Why is this happening?”

Why would mathematics have the answer?

Because to do this experimentally would take years. You could find out much more quickly if you did the math.

Now, prior to my coming on staff, the institute had hired a mathematical physiologist, Kevin Hall. Kevin developed a model that could predict how your body composition changed in response to what you ate. He created a math model of a human being and then plugged in all the variables — height, weight, food intake, exercise. The model could predict what a person will weigh, given their body size and what they take in.

However, the model was complicated: hundreds of equations. Kevin and I began working together to boil it down to one simple equation. That’s what applied mathematicians do. We make things simple. Once we had it, the slimmed-down equation proved to be a useful platform for answering a host of questions.

What new information did your equation render?

That the conventional wisdom of 3,500 calories less is what it takes to lose a pound of weight is wrong. The body changes as you lose. Interestingly, we also found that the fatter you get, the easier it is to gain weight. An extra 10 calories a day puts more weight onto an obese person than on a thinner one.

Also, there’s a time constant that’s an important factor in weight loss. That’s because if you reduce your caloric intake, after a while, your body reaches equilibrium. It actually takes about three years for a dieter to reach their new “steady state.” Our model predicts that if you eat 100 calories fewer a day, in three years you will, on average, lose 10 pounds — if you don’t cheat.

Did you ever solve the question posed to you when you were first hired — what caused the obesity epidemic?

We think so. And it’s something very simple, very obvious, something that few want to hear: The epidemic was caused by the overproduction of food in the United States.

Beginning in the 1970s, there was a change in national agricultural policy. Instead of the government paying farmers not to engage in full production, as was the practice, they were encouraged to grow as much food as they could. At the same time, technological changes and the “green revolution” made our farms much more productive. The price of food plummeted, while the number of calories available to the average American grew by about 1,000 a day.

Well, what do people do when there is extra food around? They eat it! This, of course, is a tremendously controversial idea. However, the model shows that increase in food more than explains the increase in weight.

That was very interesting!