Mrs.B commented on Doone's group Humans of Earth and an Imbecile Named Scump News
6 hours ago

Stephen commented on Sydni Moser's group Coffee Break without any Mention of that Idiot
"The Irish diaspora has always been larger than those that stay home."
8 hours ago

Mrs.B commented on Doone's group Humans of Earth and an Imbecile Named Scump News
"I know, I was being a smartass, cuz accusatory statues sounds good."
10 hours ago

Stephen commented on Doone's group Humans of Earth and an Imbecile Named Scump News
"Mrs B, I'm not artistic at all, I can't draw or paint or hold a tune to save my life."
10 hours ago

Stephen commented on Doone's group Humans of Earth and an Imbecile Named Scump News
"while reading the full article I just couldn't believe what I was reading. I would seem that…"
10 hours ago

Stephen commented on Doone's group Humans of Earth and an Imbecile Named Scump News
"Now this something new to me. A group calling themselves the Black Hebrew Israelite Movement.…"
11 hours ago

Mrs.B commented on Doone's group Humans of Earth and an Imbecile Named Scump News
"That is beautiful, but I have mixed feelings about it being a living person. I think the symbolism…"
13 hours ago

Stephen commented on A Former Member's group Animal | Vegetable | Mineral | Fungus
"Azhdarchid was one mother of an animal. "
22 hours ago

Mrs.B commented on Hope's group Imagine No Organized Religion or at least a Religion without Scump
"Good one!"
yesterday

Stephen commented on Hope's group Imagine No Organized Religion or at least a Religion without Scump
"WOTM: Buyer Beware"
yesterday

How Much Religion Can We Tolerate In our State?

The separation of church and state is vital for both sides. It keeps the government from hording in on people's personal faiths, while at the same time, keeping religious extremist from using the government to push their faith (or lack of faith) on everyone. Its a win-win.

But where do we draw the line? 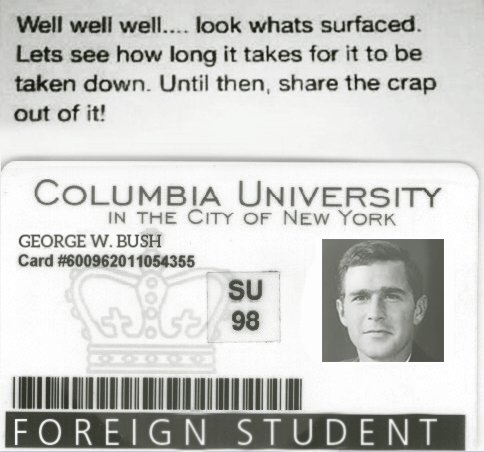 In light of full disclosure, this is a JOKE. I know the people on here are smarter then most of the Internet. But I felt the need to say it, here is the Snopes on Pres.Obama's Version of this image - http://www.snopes.com/politics/obama/birthers/studentid.asp I created this to counter act the…

Atheist Sayings by Unholyghost (ME)

to fight fire with fire, so to speak.…

Someday, Someday Soon,
We’ll all go to the moon.
To the moon.

They said it was crazy
when wingless man looked up at the sky
and said “We can Fly!”
They said, “Your crazy as a Loon!”
But up they went in a balloon.

Someday, Someday Soon,
We’ll all go to the moon.
To the moon.
They tried in vain
To maintain the mundane
And it worked for a while
But the future is here
Resistance is futile. …

The following are actual commandments of the religion known as "Satanism." Its almost a entirely satire religion for most followers do not believe in an actual "Satan" and most of the rituals are done in mock of Catholicism - but the philosophy behind it is entirely serious.

Untitled ( for the moment)

Dear God,
I just want to tell you how I feel

I don't know if your listening in

I think your completely cruel.

and the so called Christian Nation

I think that this life is better
then the life you…

When a lamp gets old and breaks down and it gets thrown away it has evolved from being a “lamp” to being a “broken lamp” and eventually, given enough time, it won’t be known as any form of “lamp” any more because It will decay and break back down into its elements. As a lamp it no longer exist, its parts are now floating around some place in the cosmos becoming a part of something else and interacting with other things. Its being recycled over and over and over again. This is also true with…

The only God you can justify morally is a very limited one. Apologist for God like to refer to him as a loving father correcting his children, which is fine if you limit him, but the moment you say he is Omnipotent, Omnipresent,…

I can’t remember a eureka moment.  That single point in time when I said: “There isn’t a God,” but I do remember being relived that their isn’t one. For me Its kind of like trying to remember when I got taller. I just remember one day being taller.

I know I use to pray when I was really young because I told I was a sinner and believing is not enough "for even the devil believes." There was a few times when I was directly asked if I was saved and if I was going to confess and be…

Allow me to introduce the largest character of life, myself. My name is Mark Andrew Strange and I am a person, first and foremost, a being with the ability to think for himself and to contemplate things outside his own existence. I was born in 1987, in a building that no longer exist as it once did, but that's okay, that's how the universe works I suppose, always in perpetual motion, always changing, recycling itself forever. The building of which I speak is Oral Roberts's City of Faith…

Faith Does Not Require Proof

I think its funny that people of religious faith tend to try and prove their position. They get so angry when I show them evidence to the contrary even using their own bible to defeat their arguments - they especially hate it when I do that.

Here is a link to 600+ Atheism vs. Theism Debates posted on common sense atheism I found this very useful and I thought I'd share this little treasure. It would be awesome if we had a list like this on Atheist Universe.

Logic: Why God Explains Nothing

If the universe is so complicated that it requires a creator, then creator must then be even more complicated then his creation? This begs then the question: What created him?

There once was a god fearing righteous father who sat around a dinner table with his family when a strange came knocking. The stranger was clearly in need of food and drink and the father being a kind man let this stranger in.

What a kind thing do, clearly the religious are very good descent people.

A group of evil gay men from the city, who saw the stranger enter the religious mans home, walked up beat upon the door, practically knocking it off its henge. The…

The Bible Is Not The Word Of God

Video Blog: Bend Over And Moon For Science

Just me and my Dad driving around. Just a bit of warning there's a bit of crude childish humor.

Killing the innocents
Streams fill with their blood,
Crying out from the depth of intolerance
But it's okay because
the enemy was among them,
It’s okay because they’re different
and probably deserved anyway.

She washed up on shore
Her clothing ripped from her
Signs she was raped
Probably provoked it, the filthy slut.
She was a woman of respect
But who cares what she had to say
She was a whore anyway.