Mrs.B commented on Doone's group Humans of Earth and an Imbecile Named Scump News
"But they didn't crop out the hand showing at her waist.....mistakenly my butt!!!"
6 minutes ago

Mrs.B commented on Adriana's group Freethought and Funny Bones
"We need the laughs now."
17 minutes ago

Onyango Makagutu commented on Adriana's group Freethought and Funny Bones
"Mrs. B that cake joke is hilarious. Jimmy Carr is brilliant"
11 hours ago

Tom Marvolo Riddle is now a member of Atheist Universe
15 hours ago
Welcome Them!

Mrs.B commented on Doone's group Humans of Earth and an Imbecile Named Scump News
19 hours ago

Doone commented on A Former Member's group Animal | Vegetable | Mineral | Fungus
"The fluffy panda ant isn't actually an ant, but a wingless wasp. They have an extremely…"
19 hours ago

Doone commented on A Former Member's group Animal | Vegetable | Mineral | Fungus
"Epidendrosaurus may have hunted grubs in trees using its elongated fingers, like an aye-aye does…"
19 hours ago

Stephen commented on Doone's group Humans of Earth and an Imbecile Named Scump News
"It was just me saying that I couldn't care less what a person's colour is, but I do care…"
22 hours ago

Mrs.B commented on Doone's group Humans of Earth and an Imbecile Named Scump News
"I never mentioned colour.....it's not a factor......but he's had a very public mental…"
23 hours ago

Onyango Makagutu commented on Doone's group Humans of Earth and an Imbecile Named Scump News
"If Trump can be president, I think it opens the doors for everyone"
yesterday 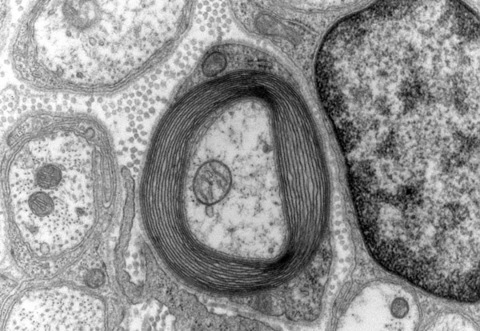 Myelin is the fatty substance in the sheaths that insulate our nerve fibers. Myelin speeds up the transmission of information between fibers, but at the same time slow myelination permits the brain to be molded by the cultural environment. It is thought to be the key to our malleable, adaptable brains. Human babies are born with very little myelin, and myelination progresses slowly throughout childhood. The maturation of this process continues throughout adolescence even into the thirties. In contrast, rhesus macaques are born with a lot more myelin and the process of myelinization is completed by the time the monkeys reach sexual maturity. Up until now, we did not know if our closest living relatives, the chimpanzees, were more like macaques than like humans. And it was a difficult to study because there aren't many chimp brains available for research (and rightly so). But a team of scientists has managed to get a hold of enough young specimens that died from natural causes to answer the question: humans are unique, chimps are like macaques, by the time they get to puberty, their myelinization process is complete. The shift is cortical maturation is uniquely human. Psychiatric disorders that manifest themselves mostly in early adulthood, such as schizophrenia, have been linked to lower expression of myelinization factors. It is possible that the delayed myelinization that is key to our adaptability to cultural environments may have left us humans vulnerable to mental illnesses. In the photo: electron microscopy of a nerve fiber covered by myelin sheaths.

A human newborn's brain is uniquely impressionable, allowing social interactions and the environment to shape its development. But this malleability may come with a price, a new study finds. A comparison of juvenile chimpanzee and human brains suggests that differences in the development of myelin—the fatty sheath that surrounds nerve fibers—may contribute not only to our unusual adaptability, but also to our vulnerability to psychiatric diseases that start in early adulthood.

Research increasingly suggests that psychiatric illnesses like depression and schizophrenia may involve problems with the timing of neural signals, says Douglas Fields, a neuroscientist at the National Institutes of Health in Bethesda, Maryland, who was not involved in the study. The nerve fibers, or axons, that connect neurons are usually protected by myelin, which enhances the neural relay of information throughout the brain. "Myelin speeds transmission of information [by] at least 50 times," Fields says, "so it matters a great deal whether or not an axon becomes myelinated."

Humans start out with comparatively few myelinated axons as newborns. We experience a burst of myelin development during infancy that is followed by a long, slow growth of myelin that can last into our thirties, says Chet Sherwood, a neuroscientist at George Washington University in Washington, D.C., and a co-author of the new study. In contrast, other primates, such as macaques, start out with significantly more myelin at birth, but stop producing it by the time they reach sexual maturity. However, Sherwood says, "extraordinarily little data exists" on brain growth and the development of myelin in our closest genetic relatives, chimpanzees.

Nerve myelination facilitates saltatory action potential conduction and exhibits spatiotemporal variation during development associated with the acquisition of behavioral and cognitive maturity. Although human cognitive development is unique, it is not known whether the ontogenetic progression of myelination in the human neocortex is evolutionarily exceptional. In this study, we quantified myelinated axon fiber length density and the expression of myelin-related proteins throughout postnatal life in the somatosensory (areas 3b/3a/1/2), motor (area 4), frontopolar (prefrontal area 10), and visual (areas 17/18) neocortex of chimpanzees (N = 20) and humans (N = 33). Our examination revealed that neocortical myelination is developmentally protracted in humans compared with chimpanzees. In chimpanzees, the density of myelinated axons increased steadily until adult-like levels were achieved at approximately the time of sexual maturity. In contrast, humans displayed slower myelination during childhood, characterized by a delayed period of maturation that extended beyond late adolescence. This comparative research contributes evidence crucial to understanding the evolution of human cognition and behavior, which arises from the unfolding of nervous system development within the context of an enriched cultural environment. Perturbations of normal developmental processes and the decreased expression of myelin-related molecules have been related to psychiatric disorders such as schizophrenia. Thus, these species differences suggest that the human-specific shift in the timing of cortical maturation during adolescence may have implications for vulnerability to certain psychiatric disorders.

Yes, makes sense.
That delay would give culture time to shape our brain some more.

This got me thinking that our brains are probably very different from those of our ancestors, even if they were anatomically modern Homo sapiens, say, 100,000 years ago, because they were exposed to a very different cultural environment. Certainly there were exposed to different stimuli than our current ones. It kind of makes you wonder what audiovisual media does to the neocortex of malleable brains.