Stephen commented on Adriana's group Freethought and Funny Bones
"Scump stupidly orders the reopening of the churches because that's such an essential event."
4 hours ago

Doone commented on Doone's group Humans of Earth and a World that has a vain, cowardly, lying, vulgar, jabbering blowhard not a Man Scump News
"Scump may go down as the worst Amercian ever "Worst health crisis in a century. Worst…"
7 hours ago

Mrs.B commented on Adriana's group Freethought and Funny Bones
"There is nothing wrong with a mask...& there are a lot of fun, cute, pretty, plain, &…"
15 hours ago

Mrs.B commented on Sydni Moser's group Coffee Break without any Mention of that Idiot
"Or greeny-yellow on close up."
15 hours ago

Mrs.B commented on Sydni Moser's group Coffee Break without any Mention of that Idiot
"It's the flesh coloured one by the blue [France]."
15 hours ago

Mrs.B commented on Sydni Moser's group Coffee Break without any Mention of that Idiot
"Next to France, below Biscay Sea"
15 hours ago

Mrs.B commented on Doone's group Humans of Earth and a World that has a vain, cowardly, lying, vulgar, jabbering blowhard not a Man Scump News
"There ya go!"
15 hours ago

Stephen commented on Sydni Moser's group Coffee Break without any Mention of that Idiot
"I'll take your word on that. Lol. "
15 hours ago

Doone commented on Sydni Moser's group Coffee Break without any Mention of that Idiot
"Northwest of Russia, I think."
15 hours ago

Stephen commented on Doone's group Humans of Earth and a World that has a vain, cowardly, lying, vulgar, jabbering blowhard not a Man Scump News
"I wanna get me some of that beer. Unlike most beers, these make your vision 20-20"
15 hours ago

Doone commented on Sydni Moser's group Coffee Break without any Mention of that Idiot
"How Earth will look with current international borders in 250 Million years.…"
20 hours ago

Mrs.B commented on Doone's group Humans of Earth and a World that has a vain, cowardly, lying, vulgar, jabbering blowhard not a Man Scump News
"US - UK...... two peas in a pod."
yesterday

"Super Earths" - Could They Seed Microbial Life in their Solar Systems? Experts Debate

This is a fascinating topic: interplanetary communications. It is a phenomenon actually happening in our local system - more than a few pounds of martian rock hit the Earth every year - it opens up the possibility that life-building materials or indeed life itself could travel between neighboring planets.

That would be typical of life, right? Filling every nook and cranny it can get to. Now scientists are beginning to consider how that neighborhood seeding would or would not be happening around our current exoplanet inventory.

It would seem that not all planetary configurations allow for this process to occur. 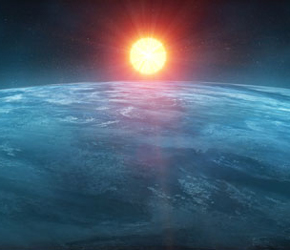 "One of the big scientific questions is how did life get started and how did it spread through the universe," said Jay Melosh, distinguished professor of earth and atmospheric sciences.

"That question used to be limited to just the Earth, but we now know in our solar system there is a lot of exchange that takes place, and it's quite possible life started on Mars and came to Earth. There's also been a great deal of discussion about the possible spread of life in the universe from star to star."

Moon rocks and Mars meteorites have been found on Earth, which led Melosh to previously suggest living microbes could be exchanged among planets in a similar manner.

A Purdue research team has found that, in contrast to our own solar system, the exchange of living microbes between "super-Earth" and planets in that solar system is not likely to occur. They examined the Gliese 581 planetary system because Planet d, known as super-Earth, falls in a "habitable zone" where liquid water could possibly exist.

The team "found the somewhat surprising result that it is very difficult for materials to spread throughout that system in the same way it could take place in our solar system," Melosh said.All four planets found in Gliese 581 are within close proximity to their central star, which results in large orbital velocities, Brock said. However, the initial velocity of material leaving Planet d is not enough to allow exchanges among planets.

Planet d would have a very small chance of transferring material to the other planets in the Gliese system and, thus, is far more isolated, biologically, than the inner planets of our own solar system. It really shows us how unique our solar system is. Melosh said a more extended solar system would be needed for exchange of materials among planets.

"None of the solar systems that have been found so far would have opportunities for exchange of life among the different planets like what our own solar system offers," he said.

The Opik-Arnold method was used to simulate 10,000 particles being ejected from Planet e and super-Earth. The velocity ranges of the particles were scaled from each of the planet's orbital velocities, which is very high by solar system standards due to the close proximity to their central star.

"Ejections from Planet d have a low probability of impact on any other planet than itself, and most ejected particles would enter an initial hyperbolic orbit and be ejected from the planetary system," according to colleague Laci Brock.

While the Gliese 581 planetary system may not favor "Super-Earth" microbial seeding, late last year, back on Earth, scientists confirmed that rocks collected in the Moroccan desert came from Mars. A little-known fact is that each year Earth is hit by by half a dozen or so one-pound or larger rocks that were blasted off the surface of Mars by large impacts and found their way into Earth-crossing orbits. Nearly 10% of all rocks blasted off into space from Mars end up crashing into Earth.

This natural "interplanetary transportation system" begs a fascinating question: If primitive and nearly indestructible micro-organisms exist on a given planet, must they by definition as a natural act or nature, travel to their immediate solar-system neighbors?