Doone commented on Doone's group Humans of Earth and a Grotesque Idiot News
"Sorry, it is obviously a penguin and not a pelican.  Oddly, i see pelicans all of the time but…"
1 hour ago

Mrs.B commented on Doone's group Humans of Earth and a Grotesque Idiot News
"Too cute to be related to scum......"
1 hour ago

Clayton Rhofes commented on Kathleen Judy's blog post A Brief Introduction To Wikipedia And The Wikipedia Community
"I love how someone loves wikipedia. I like open-source software,which means people write software…"
6 hours ago

Doone commented on Doone's group Humans of Earth and a Grotesque Idiot News
"Scump's relatives are much nicer than him.  Here is one feeding a fish to a Pelican"
13 hours ago

Stephen commented on Adriana's group Freethought and Funny Bones
"It says Betty Bowers is played by Deven Green. Does that mean that this Gal is a Guy?"
15 hours ago

Stephen commented on A Former Member's group The Burgeoning Family Tree of Monkey Men and Women
"Davy. Maybe I'm a fool but I always expect scientific evidence to persuade even the most…"
yesterday

Are human races a biological reality or social constructs? the current controversy between "race realists" and biologists and geneticists who say that race is not a biological reality. The controversy flared up a bit recently due to a review, written Jan Sapp (a biologist) of two books that insist that race has no biological validity. Sapp agrees, and states that race as "type" or as "genetic population" is a misconception, and that human races are sociocultural constructs. According to Sapp, most biologists would agree on this. I think that Sapp is correct in stating that most biologists agree with this. But Jerry Coyne disagreed with Sapp and wrote that "human races exist in the sense that biologists apply the term to animals". Jonathan Marks (a biological anthropologist) got really aggravated because he says that Coyne is ignoring all that anthropology has to say about the subject. Marks writes: "Of course the discovery that people in different places are different is a trivial one.  At issue is the pattern of those differences and its relation to the classification of the human species.  To equate the existence of between-group variation to the existence of human races  is to miss the point of race entirely.  Race is not difference; race is meaningful difference".  Malik's position is that both sides of the debate are wrong. And both are right. His article is long, but worth every word. He explains why most biologists or geneticists refuse to think of human races as being biologically valid, emphasizing that the more we know about human genomics and genetics, the fuzzier the picture becomes. His conclusion is that race is a social category but one which can have biological consequences. I'm in agreement with this. Read the entire article, you will not get bored or regret it.

Yet race is not necessarily a good guide to disease. We all know, for instance, that sickle cell anaemia is a black disease. Except that it isn’t. In the USA, the presence of the sickle cell trait can help distinguish between those with, and without, African ancestry. But not in South Africa. In South Africa, neither blacks nor whites are likely to possess the trait. Sickle cell is not a black disease, but a disease of populations originating in areas with high incidence of malaria. Some of these populations are black, some are not. There are four distinct sickle cell haplotypes (a haplotype is a set of linked genes) two of which are found in equatorial Africa, one in parts of southern Europe, southern Turkey, and the Middle East, and one in central India. The majority of people in Africa, including those in southern Africa, do not suffer from sickle cell disease.

Most people know, however, that African Americas suffer disproportionately from the trait. And, given popular ideas about race, most people automatically assume that what applies to black Americans applies to all blacks and only to blacks. It is the social imagination, not the biological reality, of race that turns sickle cell into a black disease.

The only one thing I'm 100% sure about after reading this article is... I want this puzzlegirl's phone number.

I also loved this passage for its clarity, and because I really admire the 90-year old geneticist Luca Cavalli-Sforza.

1. ‘A race is a geographically and genetically distinct population’

The first claim defines a race as a ‘geographically and genetically distinct population’. It is a concept derived from Ernst Mayr’s ‘population’ definition of race. A race, the biologist Alice Brues writes, is ‘a division of a species which differs from other divisions by the frequency with which certain hereditary traits appear among its members’. Races are distinguished from each other, not because they possess unique, fixed genetic features, but because one differs from another statistically in the frequencies of particular alleles. It does not matter what genes differ, or how many, or to what degree, just that some do to some extent.

The trouble with this definition, though, is that if we were to test for enough genes, we could find a statistical difference between virtually any two populations. As Cavalli-Sforza explains,

Our experiments have shown that even neighbouring populations (villages or towns) can often be quite different from each other… The maximum number of testable genes is so high that we could in principle detect, and prove to be statistically significant, a difference between any two populations however close geographically or genetically. If we look at enough genes, the genetic distance between Ithaca and Albany in New York or Pisa and Florence in Italy is most likely to be significant, and therefore scientifically proven.

Cavalli-Sforza adds that while ‘the inhabitants of Ithaca and Albany might be disappointed to discover that they belong to separate races’, the ‘people in Pisa and Florence might be pleased that science had validated their ancient mutual distrust by demonstrating their genetic differences.’

If any population in the world can be defined as a ‘race’, then the concept becomes meaningless. As Cavalli-Sfroza puts it in his understated way, ‘classifying the world’s population into several hundreds of thousands or a million different races’, is ‘impractical’. The anthropologist Vincent Sarichresponds that ‘it is for Nature to tell us’ what is a ‘reasonable’ number of races. But if the people of Ithaca and Albany are to be treated as distinct races, then Nature is probably telling us to trash this particular definition of race.

From that article, I want to highlight this paragraph about skin color because very often people think races should be classified just on the basis of skin color.

What about skin color?
Wouldn’t it be better to simply classify people according to skin color? As a matter of fact, no. With an estimated 70 loci affecting pigmentation, and different metabolic pathways leading to the production of the two main pigments, eumelanin and pheomelanin, skin phenotypes present the challenges of all complex traits [70]. The basic color depends on the proportion of the two main pigments, the size of
melanosomes, and their location in the epidermis. Variation has been related to mechanisms of sexual [71] or natural [72] selection, but a general preference for lightskinned partners, predicted by models of sexual selection, is not supported by data [73]. The strong correlation between melanin levels and average UV radiation (UVR) intensity is probably due to geographically variable selection, because melanin protects against excess UVR, but hinders vitamin D synthesis when UVR is low [74]. People
living at the same latitude and subjected to similar selective regimes (e.g. Europeans and East Asians) have similar skin color, but that color is the product of convergent evolution in which different mutations determine similar phenotypes [75]. Therefore, clusters of people with similar skin colors would include individuals with very different origins and genotypes 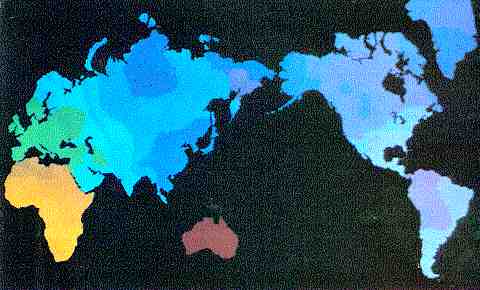 And now there are even newer measurements, with more human genomes, meaning much more than 377 DNA sequences!