Mrs.B commented on Adriana's group Freethought and Funny Bones
"From the parts I was able to understand, she is right on target."
3 hours ago

Onyango Makagutu commented on Doone's group Humans of Earth and an Imbecile Named Scump News
"I agree Mrs. B. How did they even justify getting that money?"
4 hours ago

Mrs.B commented on Doone's group Humans of Earth and an Imbecile Named Scump News
"No church or place of worship should receive loans, with the bloody handouts they keep getting from…"
4 hours ago

Stephen commented on Doone's group Humans of Earth and an Imbecile Named Scump News
"Mrs B. Many Canadians may not support Prime Minister Trudeau but none of them can deny he has done…"
5 hours ago

Today is the 42nd anniversary of an ugly chapter in American history. 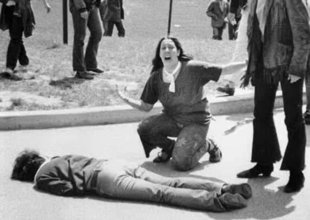 Four decades later, as police across the country deploy paramilitary tactics developed for fighting foreign terrorists on Occupy and some May Day protests, and as campus police ratchet up responses to tuition hike protests, we must ask, is this where things inevitably are headed—toward deadly confrontations between overly armed police and angered protesters, or just as likely, innocent bystanders caught in a crossfire?

Some of us lived through the Kent State shootings, anti-war protests and assassinations of that era. We also cannot forget the student strikes after the Kent and Jackson State killings that shut down universities and colleges. We are uneasy about a paramilitary police force's escalating tactics as Occupy protests continue into 2012.

What’s similar today, but happening faster in our Internet-driven era, is how both sides, police and a handful of provocateurs—who may not even be associated with protesters—are willing to use violence. That was the case Tuesday as bricks were thrown at police from a San Francisco roof apparently by a disgruntled veteran and black-clad men vandalized downtown storefronts in Seattle, San Francisco and other cities. These exceptions to what have been overwhelmingly peaceful protests get the most media attention, despite condemnation by protest organizers, including some who say police may have moderated their tactics since last fall.

I don’t want to be unduly cynical, but the Kent State and Jackson State protests were typical in their day—and were met by the same kinds of police shows of force that we have seen since last fall—the use of the paramilitary tools of their time. I don’t think it is a question of if police will be provoked into indiscriminately shooting or tasering if protests seem out of control, but of when they will panic and unleash deadly force.

Police have shown no reluctance to put on riot gear, conduct mass arrests and use pepper spray, teargas and concussion grenades in recent months, just as they have shown no reluctance to spy on protesters and preemptively arrest people they suspect, often erroneously, of being leaders, as happened in New York this week. Even this video from Portland, where protest organizers say police have backed down, shows SWAT team aiming high-powered rifles at unarmed protesters and videographers.

The Kent and Jackson State anniversaries underscore many questions. When and where will a fatal police overreaction take place? Who will be the victim? What will be the reaction, including from politicians who helped to unduly militarize the police?

This scenario is not an accident waiting to happen. Police use undue force all the time, where the consequence is the armed police shooter kills an unarmed victim. It has happened many times in 2012, according to statistics compiled by the government, just not yet at an Occupy or student protest.

What happened in May 1970 has eerie echoes today, particularly in terms of the police responses.

I remember May 4, 1940 very well. It ruined my mother’s birthday (tsk), and the Governor of New York, Nelson Rockefeller, told the New York State Police to leave the students at the SUNY Campuses alone.

The technology makes it easier for an error. Wonder if they're using drones in the cities yet.