Mrs.B commented on Adriana's group Freethought and Funny Bones
"From the parts I was able to understand, she is right on target."
3 hours ago

Onyango Makagutu commented on Doone's group Humans of Earth and an Imbecile Named Scump News
"I agree Mrs. B. How did they even justify getting that money?"
4 hours ago

Mrs.B commented on Doone's group Humans of Earth and an Imbecile Named Scump News
"No church or place of worship should receive loans, with the bloody handouts they keep getting from…"
5 hours ago

Stephen commented on Doone's group Humans of Earth and an Imbecile Named Scump News
"Mrs B. Many Canadians may not support Prime Minister Trudeau but none of them can deny he has done…"
5 hours ago

Why The Occupy Movement Frightens The Corporate Elite 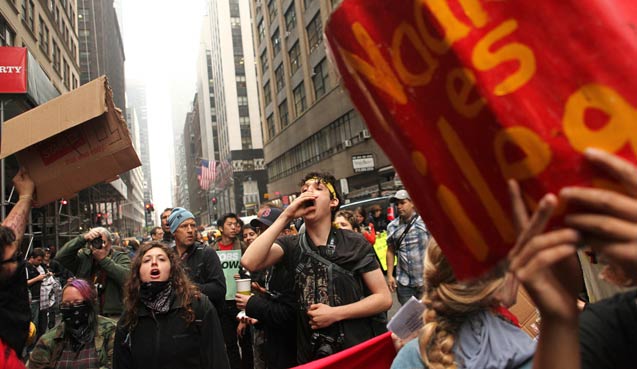 Protesters with the Occupy Wall Street movement during a march in New York, May 1, 2012. (Photo: Ozier Muhammad / The New York Times)

In Robert E. Gamer's book "The Developing Nations" is a chapter called "Why Men Do Not Revolt." In it Gamer notes that although the oppressed often do revolt, the object of their hostility is misplaced. They vent their fury on a political puppet, someone who masks colonial power, a despised racial or ethnic group or an apostate within their own political class. The useless battles serve as an effective mask for what Gamer calls the "patron-client" networks that are responsible for the continuity of colonial oppression. The squabbles among the oppressed, the political campaigns between candidates who each are servants of colonial power, Gamer writes, absolve the actual centers of power from addressing the conditions that cause the frustrations of the people. Inequities, political disenfranchisement and injustices are never seriously addressed. "The government merely does the minimum necessary to prevent those few who are prone toward political action from organizing into politically effective groups," he writes.

Gamer and many others who study the nature of colonial rule offer the best insights into the functioning of our corporate state. We have been, like nations on the periphery of empire, colonized. We are controlled by tiny corporate entities that have no loyalty to the nation and indeed in the language of traditional patriotism are traitors. They strip us of our resources, keep us politically passive and enrich themselves at our expense. The mechanisms of control are familiar to those whom the Martinique-born French psychiatrist and writer Frantz Fanon called "the wretched of the earth," including African-Americans. The colonized are denied job security. Incomes are reduced to subsistence level. The poor are plunged into desperation. Mass movements, such as labor unions, are dismantled. The school system is degraded so only the elites have access to a superior education. Laws are written to legalize corporate plunder and abuse, as well as criminalize dissent. And the ensuing fear and instability—keenly felt this past weekend by the more than 200,000 Americans who lost their unemployment benefits—ensure political passivity by diverting all personal energy toward survival. It is an old, old game.

A change of power does not require the election of a Mitt Romney or a Barack Obama or a Democratic majority in Congress, or an attempt to reform the system or electing progressive candidates, but rather a destruction of corporate domination of the political process—Gamer's "patron-client" networks. It requires the establishment of new mechanisms of governance to distribute wealth and protect resources, to curtail corporate power, to cope with the destruction of the ecosystem and to foster the common good. But we must first recognize ourselves as colonial subjects. We must accept that we have no effective voice in the way we are governed. We must accept the hollowness of electoral politics, the futility of our political theater, and we must destroy the corporate structure itself.