Mrs.B commented on Adriana's group Freethought and Funny Bones
"From the parts I was able to understand, she is right on target."
5 hours ago

Onyango Makagutu commented on Doone's group Humans of Earth and an Imbecile Named Scump News
"I agree Mrs. B. How did they even justify getting that money?"
6 hours ago

Mrs.B commented on Doone's group Humans of Earth and an Imbecile Named Scump News
"No church or place of worship should receive loans, with the bloody handouts they keep getting from…"
7 hours ago

Mrs.B commented on Doone's group Humans of Earth and an Imbecile Named Scump News
"Yes, we know he's not perfect, but he's trying to do his best for us, & he's…"
7 hours ago

Stephen commented on Doone's group Humans of Earth and an Imbecile Named Scump News
"Mrs B. Many Canadians may not support Prime Minister Trudeau but none of them can deny he has done…"
7 hours ago

Stephen commented on Sydni Moser's group Coffee Break without any Mention of that Idiot
"Indeed a wonderful voice. And a great hero of the British Labour movement "
17 hours ago

Mrs.B commented on Julien's group The Music Box
"I like some Blues, but not a Tom fan."
18 hours ago

Mrs.B commented on Julien's group The Music Box
""Wildflower" is a song written by Doug Edwards and Dave Richardson in 1972.…"
18 hours ago

Mrs.B commented on Sydni Moser's group Coffee Break without any Mention of that Idiot
"Yes, love a good voice."
18 hours ago

Davy commented on Julien's group The Music Box
"What year was that song released Mrs.B? Nice song and a good voice singing it. With you there about…"
20 hours ago

Davy commented on Sydni Moser's group Coffee Break without any Mention of that Idiot
"Yes! He did have a good bass voice Mrs. B I remember him coming to the Auss when the Sydney Opera…"
20 hours ago

The Corporate Media's Attempt to Kill the Occupy Movement 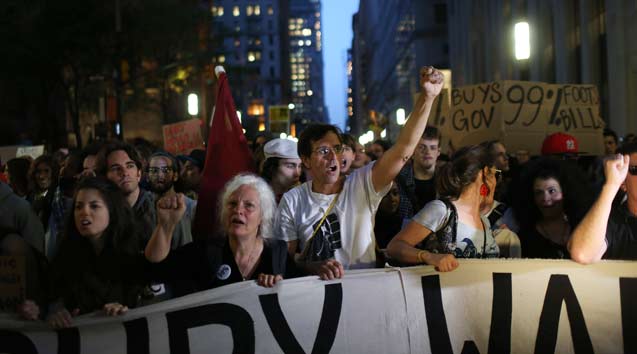 Protesters with the Occupy Wall Street movement make their way down Broadway in New York, May 1, 2012. (Photo: Michael Appleton / The New York Times)

"It was a bright cold day in April and the clocks were striking thirteen." George Orwell, "1984."

This May Day brought the explosive global resurgence of Occupy, one of the most significant social movement in decades. In New York City, the heart of global capitalism and center of the movement, the New York Civil Liberties Union estimated that 30,000 demonstrators took part in a massive rally and march down Broadway, led by a score of city taxicabs. As has become alarmingly common for a country that constantly proclaims its zealous devotion to democracy, the day ended with brutal police violence and arrests.

The visible success of Occupy in creating a space for the voice of the people impelled uncontrolled thousands to pour onto the streets of New York City, Oakland, and elsewhere around the country and across the world on May Day, in the start of what US organizers have called an "American Spring." Touting its message of class solidarity--"we are the 99 percent" - Occupy has revealed the profoundly undemocratic nature of a democratic consensus expressed by corporate-sponsored political representatives, demanding direct popular involvement in areas of social and political life normally dominated by ruling class power.

The powerful rejuvenation of the Occupy movement, however, was used by the US media - owned by the very same interests that Occupy directly threatens - as an opportunity to finally kill the Occupy movement and marginalize the voices of its participants. Since September, the mainstream press in the US has systematically ignored and demonized the Occupy movement. The nakedness of the class bias in this case, however, was especially jarring: the size and significance of the protests were downplayed, reports of police brutality were largely ignored, and the movement was portrayed as violent and dangerous. Many of the most prominent US news outlets, such as The New York Times, practically ignored the protests altogether. These shameful distortions by the corporate press display the function of the media as an organ of the rule of "the 1 percent," and reveal how threatened elites are by organized, direct action and democratic participation.