Mrs.B commented on Adriana's group Freethought and Funny Bones
"From the parts I was able to understand, she is right on target."
4 hours ago

Onyango Makagutu commented on Doone's group Humans of Earth and an Imbecile Named Scump News
"I agree Mrs. B. How did they even justify getting that money?"
5 hours ago

Mrs.B commented on Doone's group Humans of Earth and an Imbecile Named Scump News
"No church or place of worship should receive loans, with the bloody handouts they keep getting from…"
5 hours ago

Stephen commented on Doone's group Humans of Earth and an Imbecile Named Scump News
"Mrs B. Many Canadians may not support Prime Minister Trudeau but none of them can deny he has done…"
6 hours ago

Quebec's Fight Is Our Fight

I gave a talk last week at Canada's 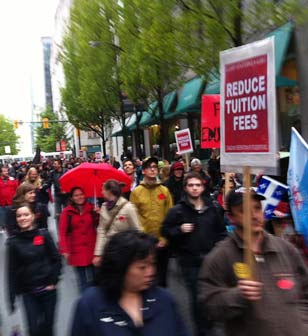 Wilfrid Laurier University to the Congress of the Humanities and Social Sciences. Many in the audience had pinned small red squares of felt to their clothing. The carre rouge, or red square, has become the Canadian symbol of revolt. It comes from the French phrase carrement dans le rouge, or "squarely in the red," referring to those crushed by debt.

The streets of Montreal are clogged nightly with as many as 100,000 protesters banging pots and pans and demanding that the old systems of power be replaced. The mass student strike in Quebec, the longest and largest student protest in Canadian history, began over the announcement of tuition hikes and has metamorphosed into what must swiftly build in the United States—a broad popular uprising. The debt obligation of Canadian university students, even with Quebec's proposed 82 percent tuition hike over several years, is dwarfed by the huge university fees and the $1 trillion of debt faced by U.S. college students. The Canadian students have gathered widespread support because they linked their tuition protests to Quebec's call for higher fees for health care, the firing of public sector employees, the closure of factories, the corporate exploitation of natural resources, new restrictions on union organizing, and an announced increase in the retirement age. Crowds in Montreal, now counting 110 days of protests, chant "On ne lâche pas"—"We're not backing down."

The Quebec government, which like the United States' security and surveillance state is deaf to the pleas for justice and fearful of widespread unrest, has reacted by trying to stamp out the rebellion. It has arrested hundreds of protesters. The government passed Law 78, which makes demonstrations inside or near a college or university campus illegal and outlaws spontaneous demonstrations in the province. It forces those who protest to seek permission from the police and imposes fines of up to $125,000 for organizations that defy the new regulations. This, as with the international Occupy movement, has become a test of wills between a disaffected citizenry and the corporate state. The fight in Quebec is our fight. Their enemy is our enemy. And their victory is our victory.

This sustained resistance is far more effective than a May Day strike. If Canadians can continue to boycott university classrooms, continue to get crowds into the streets and continue to keep the mainstream behind the movement, the government will become weak and isolated. It is worth attempting in the United States. College graduates in Canada, the U.S., Spain, Greece, Ireland and Egypt, among other countries, cannot find jobs commensurate with their education. They are crippled by debt. Solidarity means joining forces with all those who are fighting to destroy global, corporate capitalism. It is the same struggle. A blow outside our borders weakens the corporate foe at home. And a boycott of our own would empower the boycott across the border.

The din of citizens beating pots and pans reverberates nightly in cities in Quebec. The protesters are part of what has been nicknamed the army of the cacerolazo, or the casseroles. I heard the same clanging of pots and pans when I covered the protests against Manuel Noriega in Panama and the street protests against Augusto Pinochet in Chile. Quebec Premier Jean Charest, who despite Law 78 has been unable to thwart the street demonstrations, is the latest victim. I hope the next is Barack Obama or Mitt Romney; they, and Charest, are puppets manipulated by corporate power.

The importance of the Occupy movement, and the reason I suspect its encampments were so brutally dismantled by the Obama administration, is that the corporate state understood and feared its potential to spark a popular rebellion. I do not think the state has won. All the injustices and grievances that drove people into the Occupy encampments and onto the streets have been ignored by the state and are getting worse. And we will see eruptions of discontent in the weeks and months ahead.

If these mass protests fail, opposition will inevitably take a frightening turn. The longer we endure political paralysis, the longer the formal mechanisms of power fail to respond, the more the extremists on the left and the right—those who venerate violence and are intolerant of ideological deviations—will be empowered. Under the steady breakdown of globalization, the political environment has become a mound of tinder waiting for a light.