Mrs.B commented on Adriana's group Freethought and Funny Bones
"From the parts I was able to understand, she is right on target."
5 hours ago

Onyango Makagutu commented on Doone's group Humans of Earth and an Imbecile Named Scump News
"I agree Mrs. B. How did they even justify getting that money?"
6 hours ago

Mrs.B commented on Doone's group Humans of Earth and an Imbecile Named Scump News
"No church or place of worship should receive loans, with the bloody handouts they keep getting from…"
6 hours ago

Mrs.B commented on Doone's group Humans of Earth and an Imbecile Named Scump News
"Yes, we know he's not perfect, but he's trying to do his best for us, & he's…"
6 hours ago

Stephen commented on Doone's group Humans of Earth and an Imbecile Named Scump News
"Mrs B. Many Canadians may not support Prime Minister Trudeau but none of them can deny he has done…"
7 hours ago

Stephen commented on Sydni Moser's group Coffee Break without any Mention of that Idiot
"Indeed a wonderful voice. And a great hero of the British Labour movement "
17 hours ago

Mrs.B commented on Julien's group The Music Box
"I like some Blues, but not a Tom fan."
18 hours ago

Mrs.B commented on Julien's group The Music Box
""Wildflower" is a song written by Doug Edwards and Dave Richardson in 1972.…"
18 hours ago

Mrs.B commented on Sydni Moser's group Coffee Break without any Mention of that Idiot
"Yes, love a good voice."
18 hours ago

Davy commented on Julien's group The Music Box
"What year was that song released Mrs.B? Nice song and a good voice singing it. With you there about…"
20 hours ago

Davy commented on Sydni Moser's group Coffee Break without any Mention of that Idiot
"Yes! He did have a good bass voice Mrs. B I remember him coming to the Auss when the Sydney Opera…"
20 hours ago

Ah, Arizona. With the mindset of a child, it's the state that, at times, makes the south look progressive. If you check his quote, it's not because of someone who is transgendered that he wants to prevent from using the opposite gender's facility, it's because of people who want to do that because "they're weird." You know, men wanting to see women or women wanting to see men, that's a real oddity. 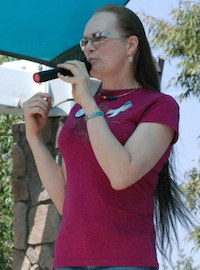 for Phoenix's nondiscrimination protections, could face arrest for using the women's restroom under this law.

Last month, the City Council of Phoenix, Arizona passed sweeping nondiscrimination protections, ensuring that people have equal access to employment, housing, and public accommodations regardless of their sexual orientation or gender identity. One state lawmaker, Rep. John Kavanagh (R) is not pleased that transgender people will be protected when using the correct bathroom, and so he has introduced a new bill to ban them from doing just that.

Kavanagh gutted a Senate Bill about a Massage Therapy Board to use as a shell for his new amendment, which prohibits a person from entering a “public restroom, bathroom, shower, bath, dressing room, or locker room” if the sex designation of that facility does not match the individual’s birth certificate. He defended his “show your papers to pee” bill in an interview with 12 News Phoenix:

KAVANAGH: The city of Phoenix has crafted a bill that allows people to define their sex by what they think in their head. If you’re a male, you don’t go into a female shower or locker room, or vice versa. It also raises the specter of people who want to go into those opposite sex facilities not because they’re transgender, but because they’re weird.

They are afraid of their inner transvestite.