Stephen commented on Julien's group The Music Box
"Love him or hate him, Tom Waits was the coolest man ever to draw breath. Tom Waits A Sweet Little…"
15 hours ago

Mrs.B commented on Sydni Moser's group Coffee Break without any Mention of that Idiot
"Nice voice."
16 hours ago

Mrs.B commented on Doone's group Humans of Earth and an Imbecile Named Scump News
"I say 2 year old, but who's quibbling?"
16 hours ago

Stephen commented on Sydni Moser's group Coffee Break without any Mention of that Idiot
"Paul Robeson sings to Scottish miners (1949) Paul Robeson, maligned in America and revered in the…"
16 hours ago

Stephen commented on Doone's group Humans of Earth and an Imbecile Named Scump News
"Now you see him now you don't."
17 hours ago

Doone commented on Doone's group Humans of Earth and an Imbecile Named Scump News
"Toddler Scump  Niece says Trump remains "much as he was at three years old":…"
18 hours ago

Mrs.B commented on Doone's group Humans of Earth and an Imbecile Named Scump News
"But they didn't crop out the hand showing at her waist.....mistakenly my butt!!!"
21 hours ago

Mrs.B commented on Adriana's group Freethought and Funny Bones
"We need the laughs now."
21 hours ago

Tom Marvolo Riddle is now a member of Atheist Universe
yesterday
Welcome Them!

Depression is black. That's been the view of Western culture ever since the ancient Greeks, with their concept of "melan cholia" (μελαγχολία) - black bile. The idea was that psychological states were associated with particular bodily fluids; melancholy was associated with the "black bile" of the spleen, as opposed to the go-getting, passionate "yellow bile" of the gall-bladder

What this "black bile" (melan chole) actually was is rather mysterious. The gall bladder does indeed produce bile, a digestive juice which is greenish-yellow, but the spleen doesn't secrete anything as such. It itself is a dark greyish-purple, which might have given rise to the idea that it contained something black. Here's another theory.

The other color associated with depression is blue, of course, as in The Blues. However, when picturing depression-blue, I think most people generally see it as something rather close to black. It's the sky at twilight, not a bright summer's day, right? It's not a happy blue.

Winston Churchill famously referred to his depression as his Black Dog. There's a rather nice correspondence here with Chinese, though I doubt Churchill knew it. Here's the Chinese character for black and (one of) the characters for dog: 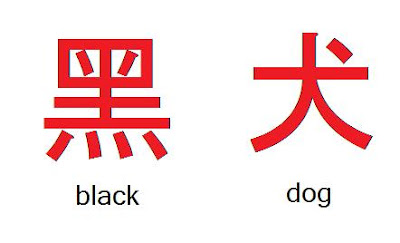 Write these as two separate characters and it says, well, black dog (badly). But there's another character which consists of "black" & " dog" combined: 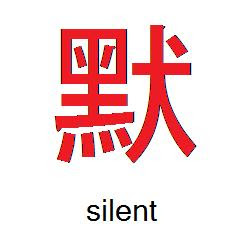 This is as good a one-word description of depression as any. Churchill's metaphor has always struck me as slightly misleading in one sense (although it's excellent in others): depression is not a thing; not even a black one. It is a lack, of motivation, energy, joy, imagination; you don't wake up and feel depressed, you wake up depressed and feel terrible, but the depression is hidden, only evident in retrospect, just as you don't tend to notice how quiet it is until a noise breaks the silence.
http://neuroskeptic.blogspot.com/2011/03/black-bile-and-black-dogs....

black dogs is not a good symbol for depression! i so agree!

and i also agree, depression is not a silent thing...mmmmMmm.  If you've ever had one, it is fairly noisey within your skull, "you suck...you suck, things will never be right again," etc etc, not fun at all!!!

However, i wonder, if the true history of that symbol may be lost in translation, maybe people used to GET or GIVE dogs to depressed people to cheer them up again???   ha ha!!  Yeah, THAT'S probably how that symbol came to be???