Stephen commented on Doone's group Humans of Earth and a Grotesque Idiot News
"(In my own opinion, for what it's worth, I would much prefer to give up Trident missiles and…"
4 hours ago

Doone commented on Doone's group Humans of Earth and a Grotesque Idiot News
"Sorry, it is obviously a penguin and not a pelican.  Oddly, i see pelicans all of the time but…"
8 hours ago

Mrs.B commented on Doone's group Humans of Earth and a Grotesque Idiot News
"Too cute to be related to scum......"
8 hours ago

Clayton Rhofes commented on Kathleen Judy's blog post A Brief Introduction To Wikipedia And The Wikipedia Community
"I love how someone loves wikipedia. I like open-source software,which means people write software…"
13 hours ago

Doone commented on Doone's group Humans of Earth and a Grotesque Idiot News
"Scump's relatives are much nicer than him.  Here is one feeding a fish to a Pelican"
20 hours ago

Stephen commented on Adriana's group Freethought and Funny Bones
"It says Betty Bowers is played by Deven Green. Does that mean that this Gal is a Guy?"
22 hours ago 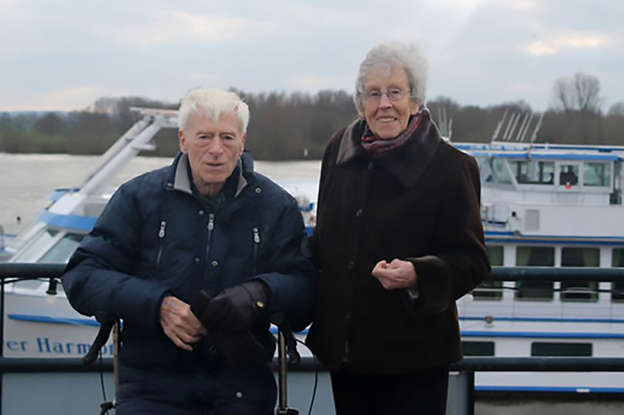 'They had a big kiss and passed away holding hands': Loving couple, 91, die together in rare double euthanasia

An elderly couple died holding hands after their request to be euthanised together was granted.

Nic and Trees Elderhorst, both 91, had been happily married for 65 years when they died on June 4 at their home in the town of Didam, Netherlands, surrounded by their loved ones.

They both filed for euthanasia due to physical problems preventing them from enjoying life.

Nic suffered a stroke five years ago and his mobility had been greatly reduced ever since.

He suffered through a lot of pain and numerous hospital visits, with antibiotics alone keeping him alive.

Nic's wife Trees' health also slowly declined as the burden of taking care of her husband grew too heavy for her.

Her memory began to deteriorate, and only with the help of neighbours, friends and healthcare workers did the couple manage to keep going.

Both feared that if one of them were to die, the one left behind would end up alone in a nursing home.

After Nic's stroke in 2012, the couple signed a special euthanasia will and studied, with the help of their children, the rules to end their lives.

The Netherlands introduced the euthanasia law 17 years ago, and since then more than 5,500 people have ended their lives, arguing they were suffering unbearably, their medical situation was hopeless and they were doing it of their own free will.

After a specialist diagnosed Trees with vascular dementia, a progressive and lethal form of dementia, the conditions to file a euthanasia request were met for both.

One of the couple’s daughters: "It soon became clear that it could not wait much longer.

"The geriatrician determined that our mother was still mentally competent.

"However, if our father were to die, she could become completely disorientated, ending up in a nursing home.

"Something which she desperately did not want. Dying together was their deepest wish."

It took half a year for the End of Life clinic to deal with the request of the OAP couple in what is described as "an intensive period" by the daughters of the couple.

Two teams, one for each senior, had to determine if Nic and Trees had an individual wish to die independent from each other.

After both teams determined all euthanasia demands according to Dutch law were fulfilled, they met with the couple and their family to pick a date on which they wanted to die.

Nic and Trees Elderhorst told all their friends about their decision and said they received a great deal of support.

They took time to say goodbye to everyone and made arrangements for their funeral.

One of their daughters said when the final day came, they said some final sweet words to each other before they died.

The daughter said: "They gave each other a big kiss and passed away confidently holding hands.

"According to their own wish."

Dutch media reports the euthanasia of Nic and Trees Elderhorst is unique as not many couples with a joint death wish get final authorisation from special euthanasia doctors.

Dick Bosscher of the Dutch Association of Voluntarily Life Ending (NVVE) said: "It is factually a coincidence when both people meet the demands for euthanasia at the same time.

Spokesman Koos van Wees of the End of Life clinic explained that "the difficulty is that both of the married people have to be more or less in the same situation with their illness", which according to him is "very rare".

Van Wees said: "It happens more often that one is further in the process. The other then wants to join because they do not see a future alone. As a reason for euthanasia that is often not enough."

The Netherlands has however been debating a proposed extension of euthanasia laws which would give all over-75s the right to assisted suicide.

Liberal parties publicly advocate the extension, although no law has yet been filed in parliament due to the fact that since the 15th March parliamentary elections no new government has been formed yet.

According to the political parties led by the left-liberal D66 Party, a few conditions would have to be met first.

There has to be a "sustainable, well-considered and intrinsic" wish to die.

A specially trained "life-ending consultant" would give their verdict about the death wish, which has to be seconded by another consultant or checking committee.

The life-ending consultant would have at least two interviews with the OAP, with at least two months between, to make sure the person knows what they are deciding and that they are not being pressured by their environment.

The life-ending consultant could be a doctor, a nurse, a psychologist or a psychotherapist.

But three Christian parties, as well as the Socialist Party (SP), have vowed to stop any such law.

MP Renske Leijten of the SP said: "Elderly care is not in order, a lot of OAPs are lonely and then they are making the ending of life easier?"

Gert-Jan Segers, an MP for the Christian Union, also attacked the plan.

He said: "The proposal relies on the myth that this is an individual choice, but relatives, society and care workers are also involved."

His party said the law would contradict with the duty of government to care for and protect the elderly, especially thoseread:http://www.msn.com/en-gb/news/world/they-had-a-big-kiss-and-passed-... in a vulnerable position.

Permalink Reply by Tom Sarbeck on August 14, 2017 at 1:29pm
Considering that I was given life without my consent, the greatest injustice of all is to deny me the right to end my life when I choose.

Religion can do no greater harm than that.

What a great story! We could all learn something here!